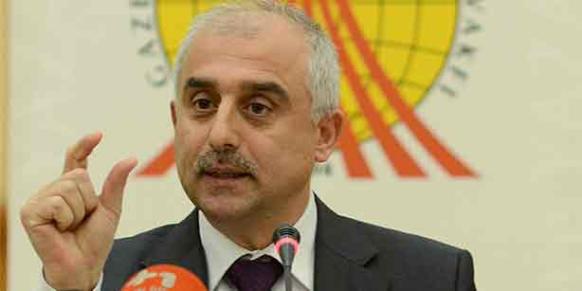 The GYV statement said the government has embarrassed Turkey in the world by orchestrating the issuance of this arrest warrant for Gülen, even though it knows the warrant will not secure his extradition from the US. “The step is not a legal one but rather a tool for propaganda,” the GYV said, stressing that the governing party aims to use the matter during the election campaign scheduled for June next year, in order to make it appear as if they asked, but the US did not extradite Gülen, and therefore he must be backed by the US.

The statement criticized the government for instigating a sham investigation, which alleges that Gülen is the leader of an armed terrorist organization, based on a fictional series aired on a TV station.

The GYV said the political authorities have already admitted that they had prepped the legal ground for such a move by rushing unconstitutional legislation through Parliament, subordinating the judiciary to the executive branch and establishing highly controversial special courts.

“In the end, the political authority tried to create a terror group based on a fictional scenario played out in a TV series and had an arrest warrant issued for him [Gülen],” the GYV said.

The foundation underlined that under existing international legal norms it is not possible for Interpol to accept the request for a “red notice” that the government wants issued for Gülen or for the US to accept the extradition request for him. An Interpol Red Notice is a type of international warrant for the location and arrest of wanted persons with a view to extradition or similar lawful action.

The GYV said it was not surprised about the decision to issue a warrant for Gülen considering the government’s track record in suspending the rule of law within last year, during which it shut down Twitter and YouTube to prevent the exercise of the right to freedom of speech on massive corruption allegations, violently cracked down on anti-government protests during the Gezi Park protests, declared a teenager who was killed through police brutality as terrorist and instigated a coup trial against a leading football team’s fan group.

A court issued an arrest warrant last week for Gülen and requested that the scholar be extradited from the United States, which is seen as a step towards an Interpol Red Notice and ultimately extradition from the US, however US law requires that the crime be recognized in both country’s jurisdictions and that the offense not be political in nature.

The First İstanbul Penal Court of Peace decided there was “sufficient tangible evidence” and agreed to issue the warrant for Gülen, a Turkish Islamic preacher who advocates a moderate Islam rooted in modern life. The move was a prelude to a formal request for Gülen’s extradition from the US, where he is living in self-imposed exile in the state of Pennsylvania.

The GYV questioned the motive behind the arrest warrant, recalling that both President Recep Tayyip Erdoğan and other government officials had previously publicly praised Gülen. It said the discourse from the government about Gülen changed when simultaneous operations were launched on Dec. 17 and 25, 2013 as part of a major investigation into alleged bribery linked to public tenders and other forms of corruption. The sons of three ministers, several bureaucrats and prominent government-linked businessmen, as well as the son of then-Prime Minister Erdoğan, were implicated in the scandals.

Erdoğan has accused the faith-based Hizmet movement, which is inspired by the teachings of Gülen, of orchestrating a plot to try to bring down the government. Erdoğan claims that Gülen’s followers within the police and judiciary were behind the graft operations. Gülen, whose teachings have inspired millions of people around the world to forge a powerful socio-religious community active in the publishing, charity and especially education sectors, has denied all the charges against him, and Erdoğan has not produced any evidence to support his claims.

The GYV in its statement also noted Gülen was acquitted of similar charges before.

GYV President Mustafa Yeşil recently criticized the unlawful actions of the judiciary during the operations against the media on Dec. 14, saying that the detentions and arrests are in violation of the law. He said the unlawful arrests not only threaten the freedom of these accused but are moreover a threat to the freedom of all the people living in this country, arguing that if the judiciary has become a tool of repression that can be used at will, then everyone will ultimately become its victim.