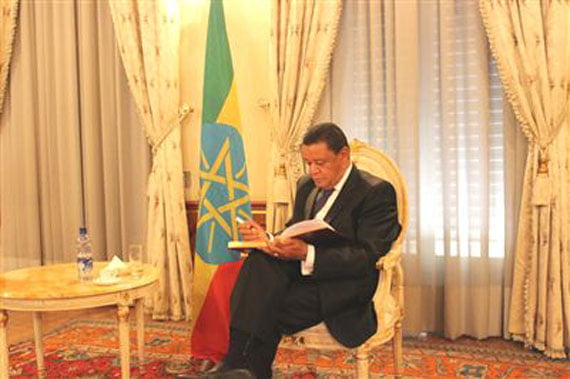 A former ambassador of Ethiopia to Ankara, Teshome warmly received the board members of the schools, which have been operating in the country for nine years, currently with 1,300 students from 35 different countries at six branches. The schools’ General Manager Murat Yildirim briefed the president on the schools’ operation and activities.

In his remarks, the president hailed the schools’ achievements. “I see Nejashi Ethio-Turkish International Schools as bridges between Turkey and Ethiopia. I’m fully aware that the schools’ officials helped us out in any matter we would have in Turkey. I also know very well that the schools played the key role in Turkish investments here and our honorary consuls’ involvement in the business networking. We’ve established the mutual trust and friendship atmosphere and set out on this journey together” Teshome said.

Speaking of the Nejashi Etho-Turkish Schools’ students, “I believe the Nejashi Schools graduates will contribute to Turkey-Ethiopia relations, in one way or another. They will form networks in order to encourage investors and thus ultimately boost the two countries relations, as they will be able to speak both Turkish and Amharic languages”

“The schools are currently offering education from kindergarten to high school. We would like to see them gradually expand into university education in time. So, you will have our support if you ever establish a university” the president added.

Expressing his thanks for the photo present, in which he had earlier posed with the Turkish PM Recep Tayyip Erdogan, “This is such a nice and complementary present to me,” Teshome remarked.

The Turkish charity organization Kimse Yok Mu (Is Anybody There?) constructed in a small town in one of Africa’s poorest countries, Chad, dedicated to the memory of Özgecan Aslan, who was brutally murdered in Mersin province on Feb. 11.