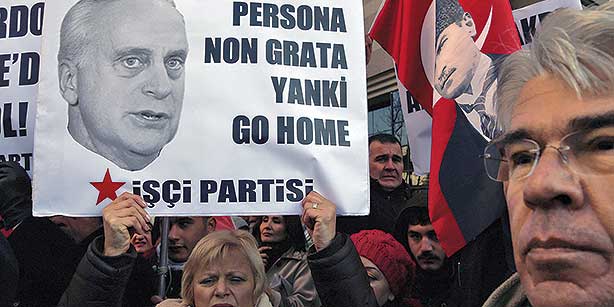 A Turkish protester holds a sign with a photo of US Ambassador Francis Ricciardone during a protest held by leftist Workers’ Party outside the US Embassy in Ankara on Dec. 23, 2013. (Photo: AP)

Turkey was shocked by the corruption scandal last week, which included allegations of money laundering and gold smuggling and resulted in the detention of the sons of three ministers and the general manager of Halkbank. The scandal led to harsh criticism of Prime Minister Recep Tayyip Erdoğan.

With dangerous and discriminatory language, Erdoğan exploits anti-American and anti-Israeli sentiment in Turkish society to demonize his opponents.

Even though there was no evidence indicating that Mr. Francis J. Ricciardone, the American ambassador to Turkey, was involved in the ongoing corruption probe in Turkey, Erdoğan targeted the U.S. ambassador:

“These recent days, very strangely, ambassadors get involved in some provocative acts. I am calling on them: Do your job, if you leave your area of duty, this could extend into our government’s area of jurisdiction,” he said.

Responding to Erdoğan’s allegations, Ricciardone said: “The United States is in no way involved in the ongoing corruption and bribery operation,” in a written statement released on Dec. 21.

Erdoğan and his followers accuse the US and Israel of using the corruption probe in a secret conspiracy against their government. Erdoğan and his team actually used the same tactics and rhetoric during the Gezi demonstrations in over the summer.

One of the reasons that politicians exploit anti-American sentiment in their battles with opposition movements and to counter allegations against the government lies in the very structure of Turkish society.

According to a Pew Research Center survey released in 2013, 71 percent of the Turkish people believe that the US may someday threaten their country.

In their article, titled “Turkish Perceptions of the West,” Dr. İbrahim Kalın, Dr. Berat Özipek and Dr. Kudret Bülbül concluded that “while Western culture and religion are not seen in antagonistic terms and the participants usually respect them, Western policies emerge as the main sources of concern, criticism and rejection.”

Therefore, Erdoğan and his team exploit anti-American and anti-Western sentiment for political reasons, especially to demonize their opponents.

The other reason that Erdoğan exploits anti-American sentiment lies in his ambition to create his own cult of personality. A cult of personality could be described as fanatical devotion to a specific person of power. It is interesting to see that some writers believe that Erdoğan is the caliph of the entire Muslim world and swear allegiance to him. During the grand opening of the Marmaray transport project in İstanbul, Erdoğan was hailed as the “leader of the century.”

In a Gazeteport.com article titled “Cult of Government, Cult of Leadership,” published on May 28, 2012, Turkish columnist Zafer Arapkirli wrote that “it is definitely an important goal of Erdoğan’s to transform himself and his party to some extent into the focus of a cult while he is in office. But keep in mind that these cults are found not in democratic countries but in authoritarian regimes.”

Throughout the 20th century, many leaders became the center of cults of personality in their nations. The loyalty of their nation was the most important thing for those leaders. They all wanted to have a godlike, infallible image. Any success of the nation was attributed to the leader, but any mistakes or failures were blamed on the failures of others or high-level conspiracies hatched by superior nations or secret societies.

The very reason that Erdoğan is contending with Mr. Fethullah Gülen is that he believes Gülen is the only obstacle in the way of his ambition to create his cult of personality, the only challenge to his leadership and his imagined future.

Examining the authoritarian regimes of the past, it is important to note that they employed very similar narratives and tried to gain total control over every segment of society and the media and led their people to believe that they were fighting for their rights against mighty powers and enemies.

Today, it is no secret that Erdoğan has total control over almost half of the Turkish media and is using the argument that he and his government are fighting huge powers like the US and Israel, which are accused of trying to block the development of Turkey. It is because of this control over the press that, while one-half of the Turkish media is covering the corruption probe, the other half is pretending there is no corruption, but an attack by the US and the Israeli lobby.

The phrase “the pen is mightier than the sword” has never been as true as it is now.

Can Erdoğan win this game?

If Erdoğan were confident enough about the corruption case, maybe he could. Instead of letting justice run its proper course, he used his political power to intervene in the judiciary and police forces.

This must be considered the most important indicator of his fall.

*Aydoğan Vatandaş is an author and investigative journalist based in New York.