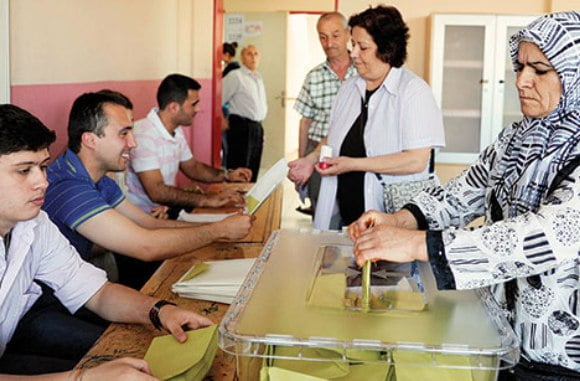 Following a number of graft probes, the first of which was made public on Dec. 17 and involves four former Cabinet ministers as well as Bilal Erdoğan, the son of Prime Minister Recep Tayyip Erdoğan, members of opposition parties have expressed on a number of occasions their misgivings that the ruling party might resort to dubious methods to come out victorious in the upcoming local elections.

Opposition parties have repeatedly warned members of the ruling party allegedly involved in graft that they would be held accountable for their corruption. That is the reason why a number of leading members of the AK Party, including Erdoğan, are taking the local elections as a life or death issue for themselves, especially if voice recordings recently leaked over the Internet implicating them in corruption turn out to be authentic.

“Whoever plans to rig the ballot box on March 30 [should know that] we will raise hell if we notice the least bit of indication of such malice,” Devlet Bahçeli, leader of the Nationalist Movement Party (MHP), warned at a party meeting in Ankara on Saturday.

Bahçeli’s remarks are in reference to claims based on voice recordings recently leaked over the Internet of a 2013 phone conversation in which Erdoğan and top managers of the Habertürk daily and the Habertürk news channel allegedly agreed to interfere a number of times in the news flow to manipulate the results of an opinion poll to be in Erdoğan’s favor. They did this by transferring about 3 percent of the poll votes supporting the MHP to the pro-Kurdish Peace and Democracy Party (BDP).

During all elections over the past 10 years, the Cihan news agency has succeeded in providing election results to its subscribers and political parties interested in obtaining ballot box results as early as possible, usually a couple of hours before ballot box results are announced. Cihan has managed to do so thanks to its reporters following the elections at voting polls all over Turkey.

For the upcoming local elections, the agency also applied to the Supreme Election Board (YSK) to obtain permission for its reporters to work at the polling stations, as had previously been the case. In a YSK decision released nearly two weeks ago, the organization underlined that the media should not be prevented from carrying out its duties during elections.

Noting that legislation is in place to allow the media to monitor elections, Bilici told Today’s Zaman: “We have gotten wind of possible obstruction attempts. … We see our work as a contribution to ballot box security and election transparency.”

The public trusts the Cihan news agency, as past years’ election results have always turned out to be correct. The agency is preparing to give ballot box results for the seventh time at the local elections in March. Noting that if one agency is allowed to report from the ballot box while another is blocked, it would be a violation of democratic principles, Bilici said, “If there are any obstructions [against us], it would lead to questions about the elections.”

The AK Party seems to fear that a devastating defeat for the ruling party in the local elections might pave the way for a fall from power, in which case those members of the government who are accused of corruption, interference with the judiciary and violation of the Constitution would find themselves before courts of law.

According to the CHP’s Toprak, who noted that based on opinion polls in pro-government media outlets, public support for the ruling party is believed to be more than 40 percent of all voters, the AK Party has already started establishing the ground for a possible rigging attempt in elections. He has the impression that reports recently published in the pro-government media aim to create a perception among the public that the ruling party’s popular support is still above 40 percent. By rigging, they seem to believe they can keep voter support for the AK Party at that level, Toprak maintained. “No matter what they do, public support for the ruling party has been rapidly decreasing and is [currently] below 40 percent,” he said.

With concerns already high over possible threats to the country’s peaceful atmosphere ahead of the approaching local elections, an AK Party deputy has drawn negative reactions for bringing a pistol to a recent party rally.

Several media outlets on Sunday published a photo that revealed a pistol hidden under AK Party parliamentary group deputy chairman Nurettin Canikli’s jacket. The photo was taken while the deputy was addressing his party’s supporters during a rally in his hometown of Giresun. According to reports, the deputy handed the pistol over to his advisor at one point.

The photo has led to comments that the deputy sought to further increase people’s fears of insecurity ahead of the elections slated for March 30. “We are on the eve of elections that will decide the fate of Turkey. … A question inevitably has crossed our minds [due to Canikli’s gun at the rally] over whether the ruling party is hoping to sabotage an atmosphere of security and prevent people from heading to the ballot box,” İsmet Büyükataman, MHP secretary-general, told Today’s Zaman.

According to official data from the Ankara Police Department’s Bureau of Firearms and Explosives, more than 250 deputies possess gun licenses for various reasons. However, the number of deputies with licensed firearms is believed to be higher, as some deputies choose to inform police departments of provinces other than Ankara.

Büyükataman said it is the responsibility of the government to enable people to go to the ballot box under safe and problem-free conditions, and with the highest voter turnout possible. “The prime minister and the interior minister should act responsibly to this end,” he stated, but added that the MHP is not hopeful that the two ministers will do so.

“As an opposition party, we [MHP members] have deep concerns. Attacks were staged on our party’s buildings in January and early February, which resulted in the death of one of our party members. Our chairman Devlet Bahçeli has expressed to the prime minister and the government our concerns about the security of elections. Yet the prime minister has not made any statements showing common sense in the wake of the attacks,” the secretary-general noted.

One person was killed and six others injured on Jan. 26 in an attack outside an MHP office in İstanbul’s Esenyurt district. The attack was followed by an assault on the CHP’s Şişli office on Jan. 27 and yet another attack on an MHP office in the city’s Okmeydanı neighborhood on Feb. 7. The attacks have led to concerns about smoldering tensions in the country.

Erdoğan has condemned the attacks, saying they were “attacks on the will of the people.” He said the government will tighten security measures for the local elections. According to Büyükataman, the photo of Canikli, along with the prime minister’s recent tough language against his rivals, is likely to increase societal tension ahead of elections.

In his address to AK Party supporters during the Giresun rally, Canikli said the ruling party will win the March 30 local elections. “A new festive atmosphere will take place on March 30. Ballot boxes will be opened and the rise of the national will is going to come out of those boxes, just as has happened in past elections,” he said.

The deputy also directed harsh criticism at opposition parties and the Hizmet movement, which the government has accused of orchestrating the Dec. 17, 2013, corruption operation that revealed a number of government members allegedly engaged in bribery and fraud.

He claimed that the main opposition party, the CHP, is in search of “dirty cooperation” to overthrow the AK Party and take over the government. “They may even be cooperating with the devil. That’s how passionately they want to take over the government,” he stated. In a veiled reference to Hizmet, Canikli said, “The parallel state has been working to force the prime minister out of the game.” He added that the movement is threatening the future and security of Turkey.

In Turkey, a deputy’s attendance at a party meeting or rally with a pistol — provided that it is licensed — is not prohibited. But it is not a common phenomenon. Yet deputies are banned from entering the parliamentary building or gardens with a weapon, according to an article in the parliamentary bylaws. They are obliged to leave their weapons at the entrance gate. If they happen to enter with a weapon, they must immediately be removed from the grounds upon the orders of the parliament speaker.

CHP Deputy Chairman Faruk Loğoğlu told reporters on Monday that he finds it “unnecessary” for a deputy to be carrying a gun. Deputies are protected by bodyguards assigned by the National Police Department. CHP Isparta deputy Ali Haydar Öner lashed out at Canikli for carrying a pistol during a party rally. “It seems that flying kicks, slaps and curses do not suffice, and now they [AK Party deputies] are walking around with guns,” he said.

Using fists and kicks is common in Parliament, especially when deputies are debating heated issues. One recent example was an event that took place in late January. CHP deputy Bülent Tezcan was taken to hospital after being punched in the eye by Oktay Saral, an AK Party deputy. The incident took place as Parliament discussed a government-sponsored bill to restructure the Supreme Board of Judges and Prosecutors (HSYK). A similar incident took place earlier in January, when AK Party deputy Zeyid Aslan delivered a flying kick to Çankırı judge Ömer Faruk Eminağaoğlu while the same bill was being discussed by a parliamentary commission.