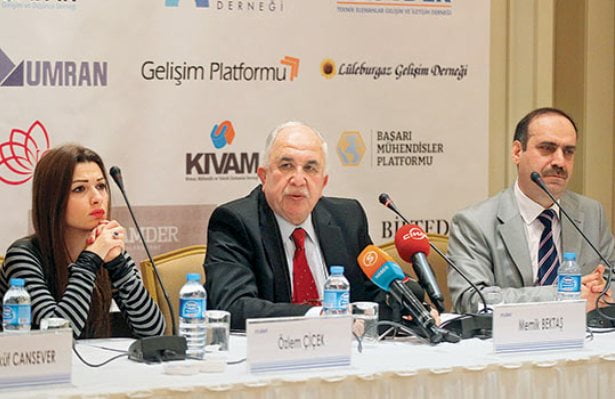 İSTANBUL
Further civil society organizations from across Turkey have condemned an ongoing defamation campaign being conducted against the Hizmet movement inspired by Turkish Islamic scholar Fethullah Gülen, calling on Prime Minister Recep Tayyip Erdoğan and other top government officials to refrain from the hate speech and polarizing rhetoric that are wounding the public’s conscience.

A large-scale dark propaganda campaign has been conducted by some circles close to the Justice and Development Party (AK Party) government against the Hizmet movement and Gülen, particularly since a corruption scandal erupted in December of 2013 in which three Cabinet ministers’ sons, many state bureaucrats and also well-known businessmen were implicated. Government officials have accused the Hizmet movement of participating in a plot and using the corruption investigation to damage the government.

Erdoğan has described the movement with various defamatory expressions such as “the parallel state,” “gang,” “virus,” “secret organization” and even “hashashin.” The hashashin were a shadowy historical group that carried out politically motivated assassinations during the time of the Seljuk Empire. These harsh and defamatory words used against the Hizmet movement — a volunteer-based grass-roots movement inspired by Gülen, which works in the field of education around the world and encourages interfaith dialogue — were met with harsh reactions from every segment of society, including politicians and CSOs.

The Law and Democracy Platform, encompassing a total of 41 CSOs in Balıkesir province, held a joint press conference on Thursday to condemn the defamatory labels used by government officials against followers of the Hizmet movement and Gülen. Speaking on behalf of the Platform, Erdem Kızılkaya said that labels such as parallel state, gang and hashashin are unacceptable.

Pointing to the reassignment of thousands of police officers and hundreds of prosecutors and judges following the Dec. 17 corruption scandal, Kızılkaya said the organization finds the government’s efforts to block the major corruption and bribery investigation that caused three ministers to resign, apply pressure on prosecutors conducting the probe and even reassign those prosecutors very saddening.

Stating that they cannot understand the reassignment of thousands of police officers following the graft probe, Kızılkaya said, “We find the reassignments that happened in the police departments and bureaucracy despite the government officials’ remarks that the government has not been monitoring people’s religious affiliations before and after the graft probe very meaningful.”

Calling on top government officials to abandon their hateful rhetoric that polarizes the public, Kızılkaya warned that government officials, Erdoğan in particular, should avoid using degrading, accusatory and hurtful expressions that will damage love, tolerance and brotherhood among the people.

Meanwhile, 71 CSOs in Antalya province held a press conference on Thursday in which they stated that the verbal attacks of Erdoğan have caused serious trauma to society, adding that there is a defamation operation targeting Gülen and the Hizmet movement.

The Free Thought Platform, which is composed of 12 CSOs, held a joint press conference in İzmir province on Thursday at which the platform called on Erdoğan to give up hate speech and polarizing rhetoric, calling on him to adopt the language of love instead. A representative of the platform, Hasan Taşkıran, said the fact that many police officers and prosecutors who were conducting the major graft probe were hastily reassigned by the government suggests that the government is trying to block the probe and tamper with evidence. Stating that the rhetoric of government officials, Erdoğan in particular, became harsher after the graft probe, Taşkıran said the hasty reassignments, which came soon after a period in which allegations that the government was keeping tabs on employees’ religious affiliations appeared in the media, strengthen the possibility that those claims were valid.

“The fact that baseless defamatory statements were used about Turkish schools, which were opened both at home and abroad with the moral and material support of the self-sacrificing Anatolian people with their high human values, dershanes [exam preparatory schools], cultural centers and reading halls deeply hurts the public conscience.”

Taşkıran said the fact that Erdoğan gave ambassadors the duty of discrediting Turkish schools in the countries where the ambassadors were serving at the recent Ambassadors’ Conference caused great public disappointment.

The Buca Businessmen’s Association (BESİAD) in İzmir also released a press conference on Thursday stating that some media outlets are part of a psychological operation being carried out against followers of the Hizmet movement. BESİAD President Serkan Mengüş said the organization condemns the defamatory expressions targeting Turkish schools, which represent Turkey in 180 countries around the world.

Bursa was another province in which tens of CSOs convened to condemn government officials’ use of defamatory expressions against the Hizmet movement and Gülen. A total of 35 CSOs held a joint press conference in Bursa province. Speaking on behalf of these CSOs, Bursa Chamber of Entrepreneurial Industrialists (BUGİAD) President Ali Fuat Er said the state system has been turned upside down by the government, adding that Turkey is no longer attractive to foreign investors and domestic investors also feel uneasy due to recent developments in the country.

Er highlighted that government officials must abandon polarizing language that treats others as the enemy, stating that the government should launch an initiative to embrace all segments of society as soon as possible. Er also said the organization is very concerned about the reassignment of police officers and members of the judiciary that are being carried out by the government with no investigation or convincing reasons, adding that such a large number of reassignments did not happen even during or after the Feb. 28, 1997 postmodern coup or the Sept. 12, 1980 military coup.

Er stated that the theory of a “parallel state,” used repeatedly by Erdoğan, is political propaganda, adding that such arguments will unfortunately cause people to become polarized.

The Marmara Federation of Engineers, Architects and Technical Staff (MUTEF), which has over 40,000 members, held a press conference on Thursday to show their reaction to the harsh statements from top government officials against the Hizmet movement and Gülen.

MUTEF President Memik Bektaş said that describing people with defamatory words such as gang, criminal organization or Hashashin and targeting members of the judiciary with names such as judicial junta or parallel judiciary is unacceptable.

Bektaş said: “The fact that a smear campaign is being carried out by the government against the Hizmet movement, which was appreciated by every segment of society and state officials until today, is very saddening and hurtful. No matter which movement they target, making such accusations with no evidence is against human rights.”

The Marmara Federation of Business Life and Labor Associations (MİHVER), encompassing 27 associations and 40,000 members, held a press conference on Thursday in which it stated that Turkey has experienced periods of military tutelage in the past, adding that Turkey is currently undergoing a period of civilian tutelage. Stating that the most prominent feature of these tutelage periods is that the law is suspended, MİHVER President Ecvet Çelik said Turkey is currently experiencing a period in which the law is suspended. Çelik also said that all the democratic steps taken so far in Turkey were demolished after the graft probe became public.

In a joint press conference held by 22 CSOs in Zonguldak province on Thursday, these CSOs protested the ongoing black propaganda war against the Hizmet movement. Speaking on behalf of the CSOs, deputy chairman of the Zonguldak Businessmen’s Association, Yakup Sağlar, said the government, which had praised Hizmet movement followers as “gönül erleri” (soldiers of the heart) only five or six months ago, made a great contradiction by likening Hizmet movement followers to the Hashashin, which is known as one of the most brutal organizations in history. Sağlar said the Hizmet movement has been targeted with baseless accusations, adding that black propaganda is under way against the movement although there is no evidence that can prove the government’s accusations are right.

The Of Entrepreneur Businessmen Association (OFGİAD), holding a press conference in Trabzon’s Of district on Thursday, also criticized Erdoğan’s harsh rhetoric. The organization called on Erdoğan and other government officials to stop these slanderous remarks and attacks on Gülen, who lives a life based on love and respect and has no aim other than to please God.

ALİ ASLAN KILIÇ, ANKARA In Muş, where I was during the final days of August for the anniversary of the Battle of Manzigert, I had the chance to speak with citizens from both Manzigert and Ağrı about the terror problem and the solution process aimed at Turkish-Kurdish peace. Last Sunday, I was in the neighborhood […]