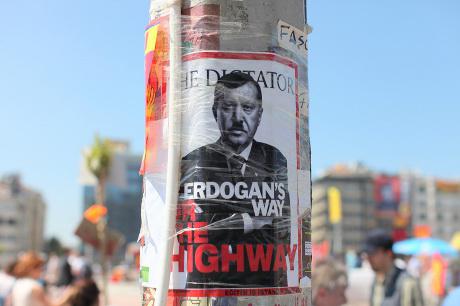 Turkish PM Erdoğan is now in his third term. In trying to control certain segments of Turkish society, including groups which supported him in his struggle against the military tutelage, he is becoming increasingly aware that they are outside his sphere of control.

As observed in the Gezi protests, Erdoğan securitized the liberal segments which did not obey him and took a stance against him, while another segment of the liberals were aligned with and became part of Erdoğan’s AKP (‘Justice and Development Party’). At the present moment, Erdoğan is trying to intimidate and suppress the Hizmet movement, trying to create a negative image of Hizmet in the eyes of the public and AKP supporters, through defamation and unfounded claims such as alleged links to the CIA, Israeli and other foreign powers.

‘Securitization’ as a concept is used to analyse the policies of those, particularly politicians, who want to change the perceptions of the masses towards any movement, groups or simply to engender negative thoughts. In a way it is a form of social engineering or perception management. Securitization is a process in which there are three actors: the securitizer or securitizing actor, the target and the audience. The main tool in the process is speech, the power of which the securitizing framework praises, regarding it as an act in the same sense as language theorists might. The success of the process is measured by looking at whether that speech is accepted by the audience or not.

Recent developments and mounting tension between the ruling AKP and the Hizmet movement reveal that in its third term the AKP elite considers any group or movement outside its control, a threat. The mainstream media has addressed this anomaly, referring to the attitude of the AKP government as resembling a fundamentally religious, Kemalist approach to power, particularly in respect of its willingness to embrace extraordinary measures of subordination and suppression.

Why has the movement been securitized?

Professor Elisabeth Ozdalga of Middle East Technical University, states “when public institutions fail to integrate citizens, the demand on other organizations and communities to fill this void increases. The Gülen [Hizmet movement] community plays a significant role in this.” For Ozdalga the Gülen Movement functions as what would be recognized in the west as a “civil society” organisation. As such, Ozdalga does not see it as a threat or in competition with the state. If anything, the Gülen Movement’s activities complement the state’s function of integrating its citizens. Such checks on the power of public institutions are indispensable in democracies. In developed democracies this is not confined to opposition political parties alone but includes other civic, interest groups.

In the case of Turkey, it seems that following the elimination of military tutelage and other Kemalist institutional strangleholds over civilians, the ruling AKP, taking around 50 per cent of the vote to secure its third term, has been doggedly determined to consolidate its power. In some academics’ words the AKP in its third term became the state itself.

This can be inferred from Erdoğan’s language as well. In his speeches he calls state ministers “my ministers”, referring to the Turkish armed forces as “my army” and similarly using appellations such as “my court”. He not only uses such language but also seeks to put these possessive phrases into practice, as evidenced during his third term, or as commonly referred to in Turkish media, Erdoğan’s ustalık dönemi (mastery phase). This approach is a real threat to one of the main principles of democracy: the separation of powers. To keep this 50 percent on his side he has shamelessly manipulated and scapegoated with the aim of obfuscating and covering up such negative developments in Turkey. This was the case after the Gezi protest and is so now following a recent corruption scandal.

The recent speeches of Erdoğan indicate that a deliberate campaign is under way to discredit the Hizmet movement. It is claimed that some members of Hizmet infiltrated state departments: but there is a lack of concrete evidence to prove this. Attempts to scapegoat the movement have occurred previously. It has been claimed that after the government’s attempt to close the dershanes(private cramming schools) down, prosecutors affiliated with the movement took these steps. Yet there is no basis for a connection between the two events; at best it demonstrates the perfect example of a ‘post hoc, ergo propter hoc’ type of logical fallacy.

The government claims that there is a parallel body in the state that has harmed the AKP intentionally, following the corruption scandals as a result of which three state ministers resigned. While this was happening, PM Erdoğan used inflammatory remarks implicating the Hizmet movement and accusing it of betraying the ‘national will’. He extolled the AKP’s election by the public and made a further series of unrealistic allegations that Hizmet is an apparatus of Israel, the USA, or part of a larger “international conspiracy”. Gülen himself reacted and invited those who made these claims to swear that their claims are true. In an emotional speech, he strongly condemned anyone who engaged in corruption and any party that was involved in corruption scandals.

The AKP government has also been citing the economy as his justification for the securitization of certain groups. During such incidents, it has been claimed by the PM that the “interest lobby” is the real power trying to harm Turkey’s economy and the current government. These same arguments were used during the Gezi Protest as well. As such, the PM presents the AKP as the guarantor of the Turkish economy,and deploys a rhetoric of fear that says, “if I lose, the Turkish economy will lose as well”. Ultimately, through these efforts, he seeks to distract attention away from corruption scandals towards the failing economy – a state of affairs caused by those he scapegoats.

Our evaluation of such intense developments in just a couple of months leads us to conclude that the government has at least the intention of suppressing Hizmet, the most influential civic movement in Turkey. To do so, it seems ready to describe Hizmet as an existential threat to the state, a “parallel state” in the police force and the judiciary that collaborates with exogenous powers. All of these claims serve the aim of securitization without any evidence. A number of columnists have also pointed to the rhetorical aspect of these claims, arguing that even the PM does not believe them; rather, his interest is absorbed in directing attention away from the judiciary and the results of the corruption scandal.

This reaction of Erdoğan is not exclusive to the Hizmet movement but extends to any civic movements questioning steps taken by the government, though few others receive as much media coverage in Turkey. To suppress Hizmet, the government has started a determined smear campaign aimed at the eyes and ears of the public, using threats and unfounded claims, supported by pro-government media outlets, and slowly turning the movement into a scapegoat for every negative development in the country.