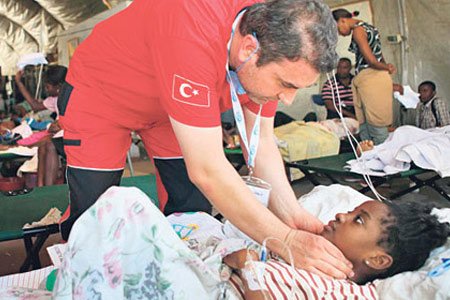 Kimse Yok Mu (Is Anybody There), a Turkish charitable association known for its international charity work, plans to establish two schools in Haiti, hit by a strong earthquake just over a month ago.

Kimse Yok Mu volunteers met with officials in Haiti and are determined to build two schools in the country, where hospitals, schools and other structures collapsed in the 7.0 magnitude earthquake.Kimse Yok Mu extended a helping hand to Haiti’s quake victims and launched an aid campaign titled “Haiti Waits for Emergency Help” to collect donations to help victims of the devastating quake. The association distributes food to 2,000 Haitians every day.

Temperatures in Haiti are on average 40 degrees Celsius at this time of year, and it is believed that corpses could still remain in the wreckage. Health officials worry this may lead to a spread of epidemics and have called for increased medical screenings.

An estimated 200,000 people died in Haiti, one of the poorest countries in the world. Hunger and health problems were among the biggest problems on this island nation before the quake, but there are more serious issues to overcome now as large parts of the Haitian capital of Port-Au-Prince have been reduced to rubble.

Turkish doctors to go to Haiti to help deliver babies

Turkish aid associations continue to help victims in Haiti by continuously extending a helping hand. Nine doctors and one official from the International Association for Health and Education (USEDER) will leave for Haiti on Feb. 20. Doctors, including a gynecologist, will help pregnant women deliver and will conduct postnatal examinations.

USEDER President Saim Şendil said they will send 100 packages of medicine to be distributed to Haiti’s quake victims. “Our teams, which comprise many doctors, will depart from Turkey to Haiti to carry out health screenings. In addition to this, they will assist in childbirth. Thanks to our doctors, many children will be born healthy in Haiti. The country urgently needs doctors, and our staff has eagerly volunteered to go. We hope to show Turkey’s helping hand to them,” Şendil said.

“Officials from Haiti report that local hospitals have run out of beds to help the injured because there are some 300,000 injured. Many are being treated in tents rather than at hospitals,” Şendil added, underlining that the injured in Haiti are waiting for help.

In addition to doctors from USEDER, 11 doctors and health officials from Kimse Yok Mu will depart for Haiti on Feb. 16.