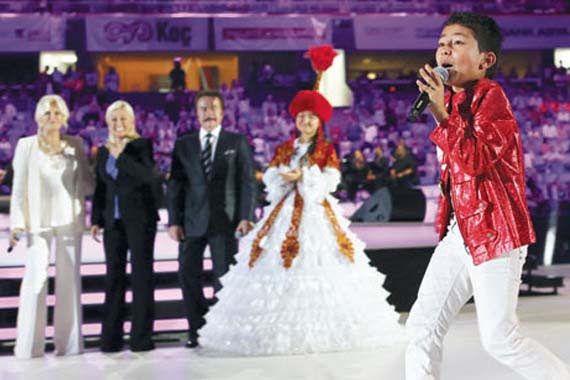 The first stop in Anatolia for these “children of Turkish” was in Izmir, at the cultural festival held there. İzmir residents were happily surprised to see young Africans dressed in their countries’ traditional clothing but speaking in Turkish in the city center’s Kemeraltı market. In the end, İzmir embraced these young guests from all over the world. It was interesting to watch the young people walking along İzmir’s seashore “kordon,” bargaining with shop owners in Turkish, seeing species of fish they weren’t familiar with and looking at the city’s famous clock tower, with all its pigeons.

Later that evening, of course, they brought city residents a night of Turkish song that would not soon be forgotten. After Izmir, the young people traveled on to Ankara’s Kızılcahamam, where they were warmly welcomed as if they were the city’s own children. At the same time, they were preparing for the Olympiad’s elimination rounds. The generally bureaucratic atmosphere of Ankara was softened — if only for a while — by the presence of these young guests, who visited the Turkish Parliament, the Supreme Court of Appeals and the Ankara Train Station.

In Bursa, these young guests began their journey with a ride on a sea bus. They ate Iskender kebab and performed for the many Bursa city residents who filled the local Ataturk Stadium. The unparalleled beauty of Bodrum, in the meantime, captivated the young people. And the Turkish songs and poetry they performed in the Bodrum Amphitheater attracted, perhaps, more guests than the theater had ever seen before.

In the end, the young people arrived in Istanbul for the Olympiad finals. It was almost time for their farewells. The energy of the song contest winner, Martin Yordanov of Bulgaria, was incredible; he seemed to fly all over the stage and won the hearts of jury members Ajda Pekkan and Orhan Gencebay as well as others on the jury. Of course, it wasn’t just the jury that was captivated; so were the many members of the audience, and the millions watching on television screens everywhere. And so these cultural ambassadors left us with memories that will last forever. At the airport, the sad farewells between Angel Lazaro and his friends from Thailand were akin to the most melancholic of songs. They met as competitors in a single language — Turkish — but parted ways as friends for life.