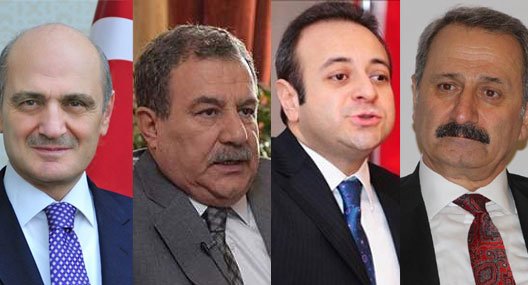 Turkish ministers, whose sons were detained as part of the corruption probe.

Paralysis of politics is prevailing in Turkey nowadays. Democratization efforts have been overshadowed by the corruption scandal but still power-holders seek a scapegoat to put the blame on.

Indeed, the corruption crisis, the related ongoing judicial process and Prime Minister Recep Tayyip Erdoğan’s stance towards this process have led many people to have serious concerns over justice and the latest developments have made me pose the following questions. I think that we strongly need honestly speaking and honestly thinking politicians to answer these questions for the sake of liberal democracy and universal values such as rule of law.

2. Despite being suspicious about a “plot” formulated against the government, why have you not shed light upon this plot before? Do you really think that Halkbank has been used as a tool by the plot-makers? Do not you think that without any solid evidence, the head of Halkbank could not have been put into prison?

3. Why have you begun to adopt the rhetoric of “internal and external enemies of Turkey” with the outbreak of this corruption crisis? Where have these enemies been so far?

4. Is your latest legal arrangement forcing the police and prosecutors to inform the highest administrative authority about their investigations compatible with the notion of separation of powers?

5. Why have you removed hundreds of police chiefs while such a critical corruption case is going on? Isn’t this an intervention in the judicial process? You used to see the police as heroes during Gezi protests, now you see them as “bad guys.” What made you change your opinions?

6. In shoeboxes, millions of dollars are found, but still you are emphasizing the role of external actors and their domestic collaborators as the main agents who have enmity towards “big Turkey”? Please explain what you think about these shoeboxes.

7. Why have you banned journalists from entering police stations? Why don’t you want journalists to report news in these public places? Is this policy compatible with a free and independent media which is a necessity for democracies?

9. Could you please explain how a 29-year-old Iranian businessman can get into almost every single state building and take part in state protocol as easily as is seen in photos?

10. Why did you shut down investigative journalist Mehmet Baransu’s news website? Was there anything illegal on his website? Or do you aim to put pressure upon opposing media?

11. As is well known, in Turkey the bestselling English-language daily is Today’s Zaman. However, Turkish Airlines has put an end to the distribution of Today’s Zaman in airplanes and airports. How can you explain this development?

12. In the murder case of journalist Hrant Dink, it was stated that some policemen misused their duties but none of them were removed. However, in this current process, many removals have been witnessed. What would you say about this?

13. You claim that under the guise of corruption, a horrible trap for the government has been set. Can you prove this claim?

14. Distinguished professor Mehmet Altan treats this corruption crisis as the second Susurluk incident. What are your views about this statement?

15. In Spain, a similar corruption incident has been witnessed. However, unlike in Turkey, the prime minister there supported the legal process, and in addition did not label the corruption a trap set against their rule. What do you think about this?

16. Some figures who work as columnists and journalists condemn the Hizmet movement in this process and explicitly and implicitly put the blame on Hizmet movement, stigmatizing it as an agent side by side with external enemies to overthrow the government. Do you really agree with that? If so, please prove your accusations.