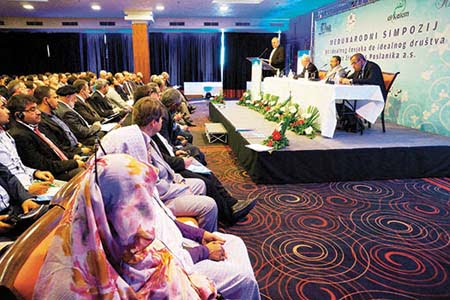 Conference on Prophet's thoughts on ideal society held in Sarajevo

A conference titled “Ideal Human & Ideal Society in the Thoughts of Prophet Muhammad,” seeking to extensively discuss the various dimensions of the Prophet’s perspectives on an ideal society in a tumultuous time, was held over the weekend in Sarajevo, the capital of Bosnia and Herzegovina.
The conference, held on April 12-14, was organized jointly by the International University of Sarajevo (IUS) and the journal Hira.

Speaking during the conference, the reis-ul-ulema of the Islamic Community in Bosnia and Herzegovina, Husein Kavazovic, said global civilizational projects should be generated against global crises. “Humanity is currently suffering from great crises. The best response to these crises should be us. We can make the world a more peaceful place by doing good things. This is also what the Prophet Muhammad told us to do. The Prophet made great efforts to create a peaceful society during his time. … In this conference, famous scholars from Bosnia and Herzegovina and the Islamic world will discuss the example of an ideal society and the ideal human inherited from the Prophet Muhammad and his companions.”

Thirty Islamic scholars from Turkey, Bosnia and Herzegovina, Egypt, Saudi Arabia, Algeria, Morocco and Sudan attended the conference. Well-respected Turkish intellectual and scholar Fethullah Gülen’s efforts to establish an ideal society by promoting intercultural dialogue around the world were also praised by the Islamic scholars during the conference.

The former head of Turkey’s Religious Affairs Directorate, Professor Ali Bardakoğlu, delivered the opening speech at the conference. He praised the efforts of the Bosnian people to establish a peaceful world in light of the unifying ideals of the Islamic religion. Hira Editor-in-Chief Nevzat Savaş said that, in order to construct an ideal society, efforts to bring up ideal people should be intensified around the world.

A conference titled “Muslims between Tradition and Modernity: The Gulen Movement as a Bridge between Cultures” was held at Potsdam University in Berlin. The respond to the question about “Ikhlas” This is been commented on this concept by Muslims an every century. But when Fethullah Gulen focuses on Ikhlas, there are two ideas are always […]

Taipei, Dec. 6 (CNA) A social movement that promotes love, tolerance, dialogue and peace inspired by Turkish Islamic scholar Fethullah Gulen bears many similarities to Confucianism, a Taiwanese scholar said Monday. Turkey is entering a period of reflection, just as ancient China during the period from 770-221 B.C., when Confucianism matured, and the Hizmet (service) […]

ALİ İHSAN AYDIN On the last day of a conference titled “The Changing Islamic World: Contributions of the Fethullah Gülen Movement” held in London, Gülen’s interfaith and inter-cultural dialogue activities were discussed. During the discussions, it was strongly stressed that Gülen opposed the “clash of civilizations” thesis through dialogue endeavors launched years ago. American academic […]