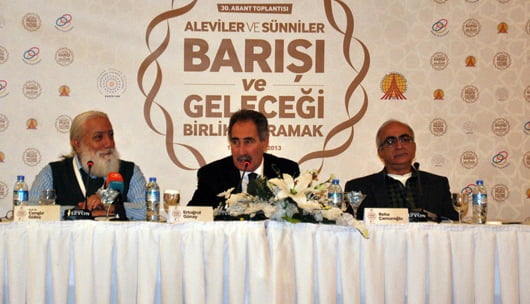 Alevis have expressed their uneasiness over pro-government comments claiming that the Gezi Park protests were an “Alevi uprising,” warning against a “dangerous approach that encourages wrong perceptions.”

“Yes. Mostly Alevis [among others] participated in the Gezi protests, because they have more grievances,” said Cafer Solgun, chairman of the Confrontation Association (Yüzleşme Derneği), speaking at the Abant Platform on Dec. 14.

“I haven’t given anyone any authorization over my child on religious issues. This sentence concerned families,” he said, also voicing unease over the government’s move to name the third bridge over the Bosporus “Yavuz Sultan Selim,” an Ottoman Sultan known to have massacred thousands of Alevis.

Solgun also cited a report from Turkish police regarding the demographics of those arrested during the Gezi protests, which revealed that 78 percent of all suspects had an Alevi religious background.

“Why do they research people’s backgrounds, instead of the reasons why Alevis poured into streets? This shows that they already see us as criminals,” he noted.

Solgun also recalled that Prime Minister Erdoğan encouraged crowds to jeer at Alevis while delivering a speech in which he slammed main opposition Republican People’s Party (CHP) leader Kemal Kılıçdaroğlu over having an Alevi background.

The title of this year’s Abant Platform, which started on Dec. 13, was “Alevis and Sunnis: Searching for Peace and a Future Together.” It was organized by the Journalists and Writers Foundation (GYV), a group affiliated with the Gülen Movement.

The three-day meeting aimed to promote mutual coexistence with open discussion sessions including over 150 people, academics, researchers, journalists, prominent figures from both Alevi and Sunni civil society groups, and officials from the Directorate of Religious Affairs (Diyanet).

“I participated in the Alevi workshop in 2009. But there has been no change over the last four years,” observed Necdet Saraç, an Alevi journalist from Yol TV.

Solgun also touched on the issues of Alevis tending to vote for the CHP, saying the ruling Justice and Development Party (AKP) should ask itself. “The government should ask itself. We are disappointed, as we had been expecting progress [during their term],” he said.

The workshops during the Alevi initiative put forth a road map that pursued the concerns of Diyanet and theologians, but not of ordinary Alevis, Solgun added.

An Alevi former adviser to Erdoğan who resigned from his post during the workshops also spoke at the Abant Platform, describing the final declaration of the Alevi workshops as “a guide for what we shouldn’t do.”

In his speech, Reha Çamuroğlu indirectly criticized certain Sunni circles close to Erdoğan, without specifically naming them, over the lack of progress on Alevis’ rights.

“[There are some] who are writing in some places and have the ability to affect decision makers, Sunnis who are not in this room. Those Sunnis are annoyed at the opportunities and status to be granted to Alevis,” Çamuroğlu said.

Despite the differences among Alevi groups, all agree on some specific demands, which have already been conveyed to the government, he added, particularly saying that cemevis should be officially recognized as places of worship and that the government budget for religious services should be equally allocated.

Federation Alevi Foundations head Doğan Bermek criticized “discrimination against Alevis” under AKP rule, saying Alevis were not being allowed to take prominent posts in the public service and Alevi businessmen were even being excluded from state tenders.

AKP deputy and former Culture and Tourism Minister Ertuğrul Günay, who recently voiced criticism of some government policies, was also among the participants of the meeting.

There is “still a deep structure in Turkey” that prevents political settlement processes for the Alevi issue, Günay said, adding that if there was a sense that Diyanet was serving a single belief, this was because of the Diyanet’s practices as perceived by the citizens.

Restructuring the Diyanet in a way to serve all religious groups in Turkey, or the idea of the complete abolishment of the organization, is also a point of discussion among Alevis.

Prof. Mustafa Ekinci proposed downgrading the role of the Diyanet. The government should not pay for religious leaders and imams, and instead people should do the state’s work and should return foundations to their owners, he said.

However, the deputy chairman of Türk Diyanet Vakıf-Sen, a union for members of the Directorate of Religious Affairs, rejected the idea of abolishing the Diyanet, saying “the Diyanet is the cement of Turkey.”

Meanwhile, Cemal Uşak said Alevi’s seized properties during the Ottoman times must be returned to owners.

The meeting, which gathered intellectuals from various ideological camps, came at a time when tension between the government and the Gülen movement has become extremely visible in the eyes of the public, over the former’s plans to “transform” private schools that prepare high school students for Turkey’s highly competitive university entrance exam.

Dismissing “cyclical political developments” as the reason for meeting about the Alevi issue, Levent Köker, rotating chairman of the Abant Platform, told the Hürriyet Daily News that they had decided on the Alevi theme because “it never leaves Turkey’s agenda.”

During his opening speech, GYV President Mustafa Yeşil emphasized that the Alevi and Sunni faiths should not be made to conflict with each other.

Although Gulen was Erdogan’s principle ally in clipping the wings of the staunchly secularist Turkish military, he quickly became his nemesis and thousands of policemen, and prosecutors accused of being Gulen followers were dismissed or displaced in what amounted to a sweeping political pogrom.