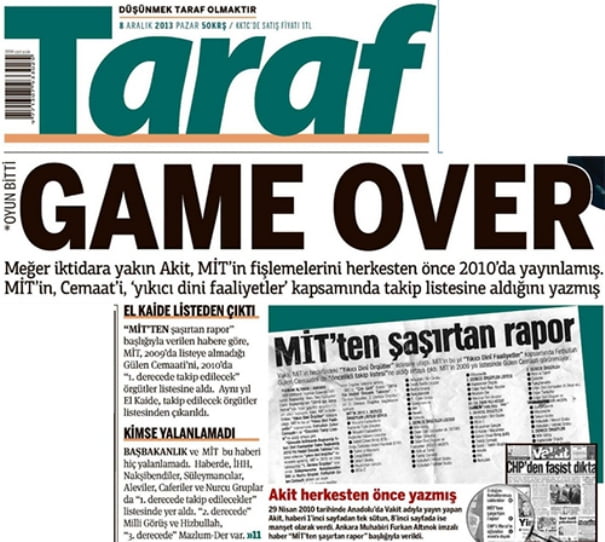 The news story that Akit, then named Anadolu’da Vakit, published on April 29, 2010, reports that while the Fethullah Gülen movement was among the religious groups to be closely monitored by MİT, the terrorist al-Qaeda had been removed from the list completely.

Although today Akit attempts to downplay the importance of similar profiling activity, it had run the story with the headline “MİT report astonishes.” Neither the Office of the Prime Minister nor MİT denied the existence of such a document.

According to the list of profiling victims published by Akit in 2010, the MİT Department of Destructive Religious Activities classified religious groups in Turkey according to the perceived level of threat they posed. The Süleymancıs (followers of Islamic scholar Süleyman Tunahan), Nakşibendis (members of a Sufi order), the Humanitarian Aid Foundation (İHH), the followers of Islamic Scholar Said Nursi and the Fethullah Gülen movement are all in the category of the highest level of threat. The National View (Milli Görüş), from which today’s ruling Justice and Development Party (AK Party) sprang, and the Association of Human Rights and Solidarity for Oppressed Peoples (MAZLUM-DER) are included in the second-level category.

Although the Gülen movement was not included on the watch list in 2009, it was added to the list the following year, while the terrorist al-Qaeda group that committed lethal bombing attacks in 2003 was removed from the list in 2010.

Similarly, the Süleymancıs and Nakşibendis were also upgraded on the threat list from the second level to the top level in the space of one year.