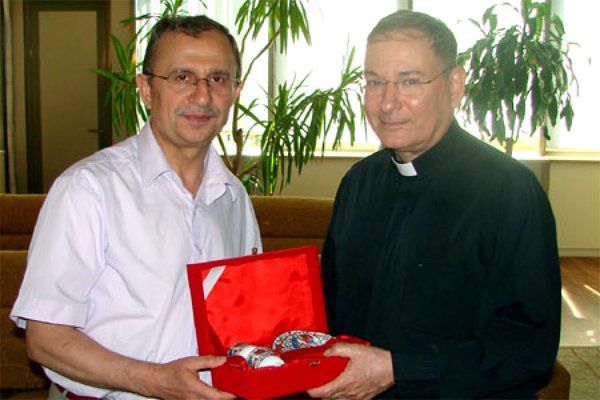 In the sixth century, the Byzantine Emperor Justinian ordered a new church to be built in his capital of Constantinople. It was dedicated to Holy Wisdom and bore the name Hagia Sophia. When the construction was completed, Justinian is said to have exclaimed, “Solomon, I have outdone thee!”  For nearly a thousand years, Hagia Sophia was the largest cathedral in the world.

It proudly stood as the epitome of Byzantine architecture at the heart of the Eastern Roman Empire, this imposing statement of the Christian faith was served by 80 priests, 150 deacons, 60 subdeacons, and 75 doorkeepers.  In the summer of 1968, I had visited this church. This past summer, I had the good fortune of visiting it again with a greater appreciation of its place and meaning in history.

For ten days, I traveled through Turkey as part of an interfaith dialogue with our Muslim neighbors. I was most privileged to be sponsored and guided through Turkey by Dr. Levent Koc of the Interfaith Dialog Center of New Jersey.  In every city we visited, we toured the cultural and historic sights as well as places of worship.

We began our trip in Istanbul.  The city is a bridge between two continents.  The Bosporus strait literally divides the city between Asia and Europe. Istanbul’s geographic position reflects its history. This cultural and romantic capital of Turkey represents the division between East and West, both historically and spiritually.  For a millennium, this was Constantinople, the capital of Christendom.  Today its skyline is crowded with minarets. It is thoroughly Muslim.  Five times a day, the muezzin’s call to prayer interrupts the city’s secular routine.

The visit to Hagia Sophia with our Muslim host was a lesson in the historical legacy that modern day Turkey has inherited.  When the Ottoman Turks conquered Constantinople in 1453, SultanMehmed II turned Hagia Sophia into a mosque.  It remained a mosque until the Republic of Turkey converted it into a museum in 1935.  As we stood beneath its impressive dome, we saw its history before us. The mihrab and the minbar, like the four minarets outside, give witness to the prayers of devout Muslims offered here in Istanbul’s principal mosque for 500 years. The partially uncovered gold icons of Christ and the saints spoke of the prior liturgies and private petitions of faithful Christians for nearly a millennium. The museum ticket we held in our hands joined us in the warmth of the summer heat to the many eager visitors dazzled by this jewel of Byzantine architecture. Where priests and prelates once raised their prayers to heaven, tourists now lift their eyes in wonder.

All along the trip that lasted ten days and included as many plane trips, our Muslim hosts extended a very warm hospitality. In each city we visited, we were welcomed into the homes and lives of Muslims who, like our host and guide, are spiritual sons and daughters of the teacher Gülen.

Fethullah Gülen is a Sufi cleric, author and intellectual.  He heads a movement promoting dialogue between peoples of different cultures. Gülen’s more than 60 books have inspired millions of people all over the world. His message is attractive. A devout believer can embrace the Muslim faith, be involved in community and live in the modern world.  While his goal is finding a way for people to live together in peace, he, nonetheless, is working toward a renaissance of Islam.

Gülen holds that both science and faith are not two contradictory truths.  In fact, he teaches that science needs to have a moral foundation from religion.  Gülen and his supporters are committed to give young people an ethical framework based on Islam for life in the modern world.  Working with professional and business people, Gülen and his supporters have successfully opened about 500 educational institutions in cities and towns in more than 90 countries, including Clifton, New Jersey.

Visiting devout individuals who are inspired by Gülen made our trip through Turkey a true journey of faith.  In each home, we exchanged gifts in friendship, sat at table laden with more good food than one could eat, and openly discussed our beliefs.  We share a common belief in one God, in an afterlife where we will be rewarded or punished according to our deeds and in the value of prayer as an act of worship of God.  When it came time for prayer, the men in the family left our company for their devotion. No excuse offered. What a witness to our society where there is a reticence to practice the faith publicly.

The closeness of each family, the joy in having many children and family commitment to Islam made a deep impression on me.  Strong family life will always remain the basic foundation of any society. Where the family is healthy and unabashedly religious, society is moral and safe.  A needed lesson for America!

Dates, rice and eggplant moussaka for birthday dinner? It works. A recent birthday of mine happened to coincide with a long-planned Ramadan Interfaith Iftar Dinner co-hosted by Pacifica Institute and Calvary Presbyterian Church in San Francisco. Since I was minimally involved in the planning and execution of the event, and maximally involved in the birthday, […]