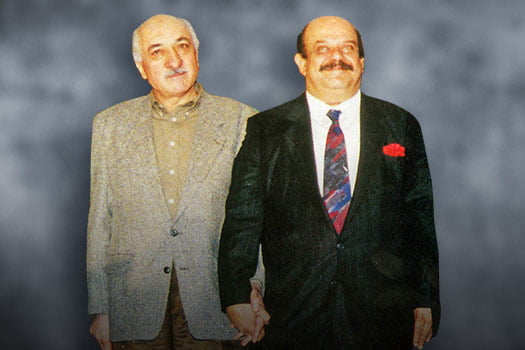 Turkish Professor Toktamış Ateş, also a columnist with the Bugün daily, passed away on Saturday January 19, 2013. Fethullah Gülen expressed his condolences in a statement he released the same day, describing Prof. Ateş an exemplary democrat in academia and media.

Known as a Kemalist and a secular, Dr. Toktamis Ates posed to the cameras, in an Iftar Dinner in 1995, hand in hand with Mr. Fethullah Gülen, which drew harsh criticism of ultra-secularists.

Having written over 30 books, he also wrote columns for the Cumhuriyet daily for more than ten years. He was most recently writing regular columns for the Bugün daily.  He was among the recipients of the “Tolerance Award” given by the Journalists and Writers Association in 1996.

Gülen recognized his contribution to dialogue, tolerance and democracy in difficult times in Turkey.

Prof. Ateş , in addition to supporting Gülen movement’s activities, wrote a forward to Gülen’s book “Love and the Essence of Being  Human.” Below is an excerpt from his forward:

….. I have to answer such questions as, “Professor, how can you be so close to reactionaries?”; “How do you bear that kind of people?”; “Are you too changing mind?” etc.

I have either written or verbally explained hundreds of times: I am in dialogue with several religious and Shari’ah-oriented people not because I pursue an agreement with them in thought but with the aim of hope of being able to find an answer to the question, “How can we live together despite our differences in thought?” Actually, I already know the answer of this question. But I am rather trying to find out the answer to the question, “How can we practice it in life?” It is this same answer, which Mr. Fethullah Gülen is searching in his book in your hand. The answer to this question can be summarized as “By believing in democracy and being tolerant.”

I am also asked: “Professor, are you aware that there are some people who want to establish a Shari’ah government?” Of course, I am; I am not blind. Furthermore, I am trying to observe them as closely as I can. But I am also trying to distinguish people who pursue a conservative [pious] life style from those who want to establish a Shari’ah government, without feeling any fear.

We are traveling on the same ship. If it sinks we will sink all together. However, our aim is that the ship should not sink. Additionally, an internal conflict will mean the biggest disaster, which we must avoid at all costs.

05 February 2012, Sunday / AKIN KARAGÜLLE, İSTANBUL James C. Harrington, director of the Texas Civil Rights Project and a law professor at the University of Texas, wrote a book titled “Wrestling with Free Speech, Religious Freedom, and Democracy in Turkey: The Political Trials and Times of Fethullah Gülen” on the trial of renowned Islamic […]