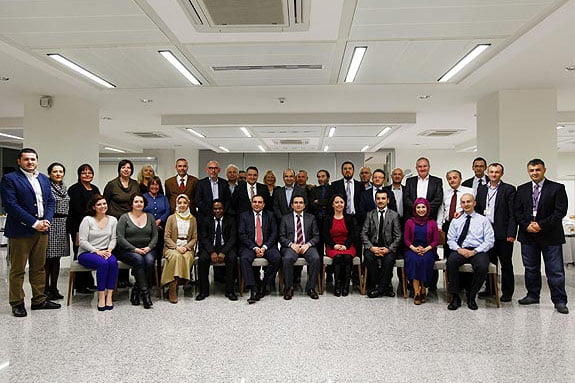 “Today’s Zaman has been acknowledged as a reliable source of news and analysis during the six years it has been in publication, which is a sufficiently long period to reveal the true character of a newspaper, and it has perhaps become Turkey’s most famous and reliable brand on the international media scene,” Today’s Zaman Editor-in-Chief Bülent Keneş told the guests in a speech he delivered at the dinner. He also thanked all the contributors to Today’s Zaman, from the editors and reporters to the page designers and copy editors, for their successful work.

Professor İhsan Dağı, a Today’s Zaman columnist, said as an academic he sees that Today’s Zaman has become a major source of reference material for those writing on Turkey over the past six years.

Columnists Doğu Ergil, Yavuz Baydar, Orhan Kemal Cengiz, Suat Kınıklıoğlu, Cengiz Aktar and Klaus Jurgens, who all spoke at the event, praised Today’s Zaman editors for their work, while also voicing criticism on some issues and raising suggestions for the daily. The attendants agreed that Today’s Zaman is one of Turkey’s most “pluralistic” dailies as it hosts columnists from all walks of life.

The attendants shared a specially made Today’s Zaman cake at the end of the event and posed for a group photo.