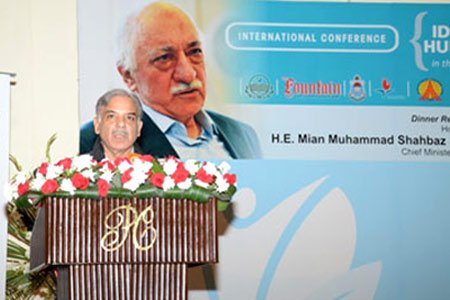 I was introduced to the personality of Fethullah Gülen in 2010 when about 300 Turkish businessmen reached Lahore just a few days before Eid-ul-Adha. They announced that they would celebrate their Eid with the flood victims of Pakistan. It was a matter of amazement for us.

Turkey is considered as one of the largest economies of the world and this fact makes it clear that the businessmen should also be well off. Keeping in view their life style we may imagine that they are also western. So what made them agreed to leave their families behind and spend their Eid time with flood victims of Pakistan?

This incident made my wish even stronger to visit Turkey and meet the people over there. The Turkey I was introduced through books was the sick man of Europe. Other than that I was more aware of Kemal Ataturk and the Turkey, which emerged as a result of his reforms. Kemal Ataturk who, after abolishment of caliphate, took control of the country and while putting his country on the path of progress and development, gave up all historical, cultural and moral values. After that for a long period Turkey was westernized where Army and bureaucracy worked together to introduce European life style and values. You can imagine the intensity of this by keeping in mind the fact that using a head scarf and offering prayers in the office were completely banned. Form of government and departments was secular and help of army was asked to implement all this. The problem was the fact that despite all this Turkey was not a developing country. Financial position of the masses was vulnerable. Turkish currency was on the way of devaluation and its impact was imminent on all the departments.

It’s only 10 to 15 years back when this Turkey took a new turn in leadership of Tayyip Erdoğan and now Turkey is a developing country. But the question that arises here is, would it be possible to get this development without restructuring of the organizations or bringing some basic changes in them? The answer is definitely no. We can imagine that the departments were on the way of change for quite some time. This change was brought there by the people like Fethullah Gülen and now due to the impacts of this change now Turkey is not only Islamic in restructuring of its departments but also progressing in welfare. How did all that become possible? How to be an ideal human being? What should be the features of an ideal society? What is the ideology of M. Fethullah Gülen?

With this reference Rumi Forum Pakistan, The Fountain Magazine, Journalists and Writers Foundation Turkey in collaboration with Higher Education Commission of Pakistan, Government of the Punjab and Punjab University, organized an international conference in Lahore on 20 and 21 November 2012. The purpose of organizing this conference in Pakistan was to bring the Pak-Turk relations closer at an intellectual level. According to Fethullah Gülen a society can transform into an ideal society by way of raising ideal individuals, who can change our life on this planet to a peaceful and pleasant one.

Scholars from different parts of the world attended the conference and listening to their papers and discussion with them we witnessed how extensively these people were influenced by the thoughts and philosophy of Gülen.

Let me briefly introduce who M. Fethullah Gülen is. He was born in a typical religious family in Turkey. He got his early education and training of Qur’an from his beloved mother and learnt Arabic and Persian from his father. His father had friendship with various scholars of his time and Gülen got a great opportunity of learning from them under his father’s supervision. Among the fields of knowledge he excelled were typical Islamic fields of knowledge like philosophy, logic, hadith and other subjects. He also benefited from the works of contemporary writers. It was the scholarship he obtained and his own deductions that paved the way for Turkish success in present age.

For development of a society, it is necessary that all its components; family, political system, religion and economic system should be aligned. There should be some governing philosophy. This is the thing that our people couldn’t realize but Fethullah Gülen did, and inspired from his thoughts his followers started revolutionary works in the fields of teaching faith, social work, communication, health, industry, education and many other areas. In the higher education institutions established on his philosophy, including Fatih University, such research work is going on in the subjects of Physics and other fields which can be compared with any other European university. The hospitals established on the foundations of his thoughts can compete with the best hospitals of Europe and USA. On newspapers, magazines, books and television channels, one can feel the glimpse of his ideology. These works are done by such people who are inspired by his thoughts.

The greatest work these people have done is in the field of education. In these circumstances since 1970 many educational institutions have been established. According to him an ideal educational model is the one, which can teach them the moral values in addition to inculcating the quality of learning on scientific basis. It is not a new or unique thought but Gülen cleaned it from all types of ideological prejudices. According to him, education, basically, is the name of not only acquiring knowledge but also learning fundamentals of good character and understanding the quality of logical reasoning. For this purpose one has to think beyond his race and other preconceived notions and education will help them in this regard.

In the light of these thoughts we should have a look at our own conditions and raise questions that whether our education is freeing us from our racial pride and prejudicial ignorance. After getting education are we getting liberated from our ideological prejudices? Are our institutions running in alignment with each other? Have we got success in raising the standard of our universities so that we may compare them with European and American universities? Do we have such modern and clean hospitals where the people from other countries could come for treatment? Have we developed the courage to accept other people without thinking about their colour, creed and ideology? If the answer is in the negative then we have neither become ideal human beings nor could our society become an ideal society.

Turkey has almost materialized the dream of an ideal society based on justice, moral values, and knowledge and which is corruption free. When will we be able to do that, we will have to think seriously about it.

Committed to the mission to make the most up-to-date and accurate archive on Fethullah Gulen and the Hizmet Movement conveniently available to any inquiry, Hizmet Movement blog has taken yet another step towards reaching out to an even greater population.

The Hizmet movement, a fairly religious group that expresses a tendency for solidarity among its members, who are self-confident, well-educated and active in different parts of the world, had alienated itself in the eyes of religious people as well as regular people. Such a perception had emerged as a result of the level of education they have attained and their presence abroad.