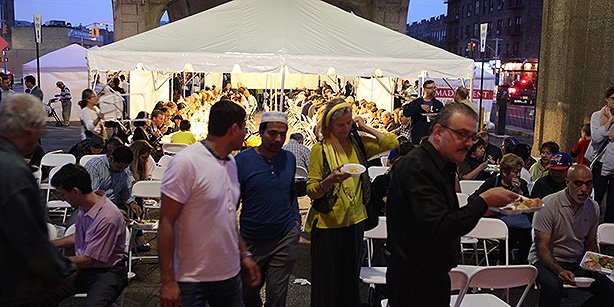 An iftar (fast-breaking meal) dinner was organized by the TCC in Queens County, New York on Saturday evening. (Photo: Cihan)

Muslims across the world fast every year during the holy month of Ramadan.

The Turkish Cultural Center (TCC) organized the iftar event in Queens. During the event, attendees of different religions were provided with information about the Ramadan tradition to contribute to inter-religious dialogue.

Governor of the State of New York Andrew Cuomo did not participate in the event, but sent his assistant to the iftar. Speaking during the event, TCC manager Oğuzhan Turan pointed out that the center’s aim is to keep Ramadan alive not only for Muslims, but also for everyone.

There were whirling dervishes on Saturday, the first day of the iftar tent organization. On Sunday, Iranian Amir Vahap and his band famous in New York for their Sufi music, took the stage for an hour, drawing great interest from an eclectic multi-national crowd.

Turan said that the center is planning to host iftar to more than 3,000 people, as they have done in previous years. Pointing out that its expectations for the first two days were fulfilled, Turan said: “Tomorrow is the last day of the iftar organization and we hope that more than 1,000 people will come, as they did today.”

Iftar in Turkish school in Romania

Lumina schools in Romania, which have been conducting their educational activities for 21 years, invited 1,000 people, including Turks and Romanians, to its annual iftar dinner organization. George Grigore described the atmosphere in the room, saying: “We have been invited to a Turkish iftar dinner. It has become a tradition here and has become the symbol of understanding and friendship. People from different beliefs are gathered here, but there is perfect tolerance and harmony.”

A Turkish businessman, Erhan Demirhan, also expressed his emotions, saying: “As Alevists, we see these schools, with both Romanians and Turks, providing the atmosphere of tolerance, love and respect.”

Humanity continues to face problems ranging from hunger and poverty to armed conflicts and all forms of discrimination, but these realities should not lead us to a sense of despair, apathy and hopelessness since a growing number of individuals, families, communities, institutions and civil society organizations as well as government sectors and intergovernmental agencies are slowly and patiently planting the seeds and nurturing the seedlings for the building of a more peaceful world, a world with much less suffering, conflicts and destruction.