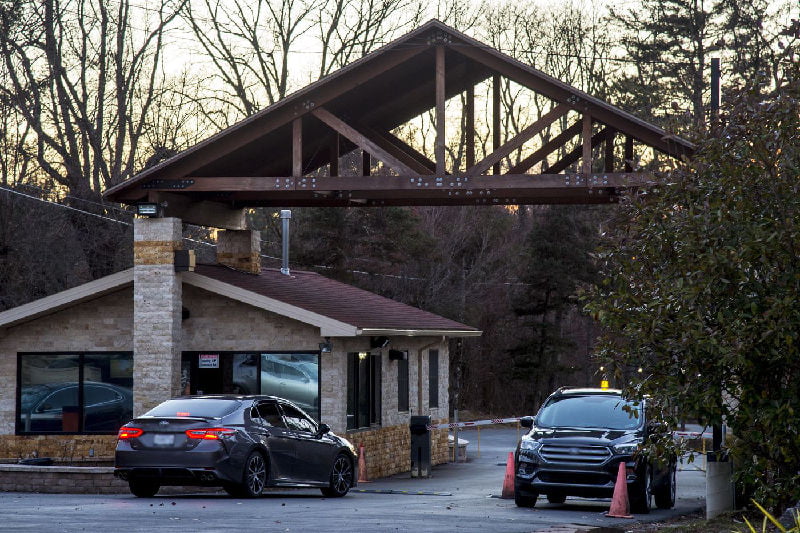 Entrance of the retreat center where Mr. Gulen resides

Monroe County United and the Chestnut Retreat Center offered the public a window into the world of Fethullah Gulen and his followers in an effort to build bridges with the local community during a special online event on Sunday evening.

Hosted by Monroe County United, “Meet our Muslim Neighbors” welcomed intrigued individuals to hear from members of the Saylorsburg center who explained the ideals of their movement, the ways in which they utilize their facilities, and how they contribute to the community as a whole.

The center, formerly known as the Golden Generation Worship and Retreat Center, was founded in 1993 by New York, New Jersey and Pennsylvania-based Turkish-American Muslims inspired by the Hizmet movement.

“Hizmet is a Turkish term which quite literally means ‘service,’ so the Hizmet Movement is centered on serving humanity,” Busra T, a CRC volunteer who handled the first portion of the evening’s presentation, said. “Hizmet is a transnational civil society initiative that advocates for the ideals that human rights, equal opportunity, democracy, nonviolence, and the emphatic acceptance of religious and cultural diversity.”

The movement began in the 1970s, growing and broadening its mission across the globe. Though religion is a core element of the movement, Busra noted that it is not restricted solely to Muslims – all religions are welcome to participate.

“CRC is a nonprofit organization that organizes educational programs, offers a space for spiritual development and religious activities, that provides community services to both the Hizmet community and the larger community. CRC also organizes interfaith and intercultural programs.”

From 1993 through 1999, the retreat mainly functioned as a summer camp that focused on “sciences and spirituality.”

“1999 was a turning point for the center, with the arrival of Mr. Fetullah Gulen,” Busra said. “It started serving more as a retreat center, and welcoming visitors who came to came to see Mr. Gulen from all around the world on a reservation basis.”

Gulen, who Busra described as a “Muslim scholar, a preacher and social advocate whose decades-long commitment to education, altruistic community service, and interfaith harmony has inspired millions around the world” has helped to adapt the Quran for a modern audience.

“In 2016, there was a staged coup, which the Turkish government has chosen Mr. Gulen as the scapegoat to some other illegal activities, and therefore, CRC has been receiving some threats related to it,” Busra said. “Mr. Gulen has consistently denied any involvement and has condemned the coup even as it was happening.”

Busra said the allegations were baseless, but by 2016, pressure from the Turkish government necessitated the hiring of security guards for the gated center.

What sets Gulen apart from other traditional Muslim leaders, Busra said, is his devotion to the education and empowerment of women. Furthermore, diversity is a central theme in his ideology, Busra said.

“One of the core tenets of his teachings is the celebration of religious, cultural, social and political diversity,” Busra said. “Gulen considers this diversity divine will, and he has a famous saying, and I quote: ‘You must have a seat for every person in your heart.’”

Gulen has been commended by Christian and Jewish leaders in Turkey, and even had a personal audience with the late Pope John Paul II. In 2008, Gulen was included in Foreign Policy and Prospect magazines’ joint poll of the “Top 100 Public Intellectuals.” In 2011, he was awarded the 2011 peace award from the East West Institute. In 2015, the Martin Luther King Jr. International Chapel bestowed the Gandhi King Ikeda Peace Award on Gulen.

CRC outreach coordinator Ali Ak offered a rare glimpse inside CRC during his portion of the presentation, showcasing the two central buildings and the eight guest houses, along with the surrounding “natural beauty” offered by nature.

On of the main questions that often arise, Ak said, is how these facilities are used.

“There are some misconceptions about what goes on behind the doors at CRC, but we have always been, and will always be transparent about its function,” Ak said. “We can categorize the activities of CRC into the following groups: First, accommodation for the guests; second, education of the community; third, dialogue and civic engagement; and finally, social responsibility projects.”

Each of the guest houses has about five guest rooms, which are able to accommodate a few people or a small family, Ak said. A commercial kitchen and large-scale dining room provide meals for guests.

“The guests usually stay one or two weeks,” Ak said. “The majority of the guests are the participants of the Hizmet Movement. Many non-participants also visit the center and stay a few days for various reasons, such as a retreat, participating in the activities, and visiting Mr. Gulen.”

With those accommodations addressing physical needs, Ak moved on to discuss how education at CRC “feed(s) the soul.”

“In Mr. Gulen’s philosophy, education is vital,” Ak said, noting that learning helps one “free your mind from many misunderstandings” that plague the world.

“The most important educational activity that CRC has is what we call ‘Halaqa,’ the Study Circle,” Ak said.

“In the circle, in addition to classical Arabic texts, some other books on psychology, sociology, philosophy and science have been summarized and discussed by these students,” Ak said.

Gulen also provides sermons on Fridays and Sunday, depending upon the state of his health, and those events are not exclusive – community members are welcome to join as well.

“You may attend these services too,” Ak said. “Just keep in mind that you need to make reservations, and also, the sermons are in Turkish.”

Those sermons are posted online at herkul.org, a website that features content in both Turkish and English – though Ak advised that articles in Turkish are more prevalent at the moment, though the English side is improving.

Outside of that, special youth sermons are conducted on a monthly basis, and groups often come together for books discussions and summer and weekend schooling sessions.

“There might be some misconceptions that these people live in isolation, but this isn’t really the case,” Ak said. “The truth is that CRC has been very active in terms of outreach and civic engagement. Every year, it organizes Thanksgiving and Ramadan dinners. Some of you may have attended these dinners. Older neighbors and friends are invited to these events. Next time you see a post about a dinner here, just come. You will not regret it, I assure you.”

Some other activities with the surrounding community include annual picnics, interfaith prayer sessions, and other events. Ak noted that anyone is welcome, despite the appearance of the guarded gate, which is present for safety and capacity issues.

In 2018, guards fired what was later called a “warning shot” at an unknown suspected intruder.

Ak said that CRC has engaged in social responsibility projects for years, working with neighboring organizations to make a difference in the community by distributing food to the needy or offering volunteers for any number of efforts.

Currently, the center is closed off from the public, gathering sizes are limited to comply with state and federal guidelines, and many events are online, but that didn’t stop CRC’s students and visitors from reaching out to help the community in the midst of the pandemic.

Ak also showcased two photos of Gulen’s rooms at the center to illustrate that despite assumptions he is living in luxury, Gulen’s accommodations are actually more along the lines of those rooms found in the guest homes: comfortable, but small and modest. And despite the fact that he is a world-renowned leader in the Muslim community, Gulen still pays his fair share, Ak said.

“He makes sure to pay rent for both the rooms and everything he uses at the center,” Ak said. “His income is mainly from the publishing royalties of his books.”

Bringing his portion of the presentation to a close, Ak summarized the ideology of CRC by explaining their ideal world, based upon their tenets of education, camaraderie and charity.

“CRC envisions a society in which everybody is respected for who they are, people live in peace, everybody is included, the poor and needy are taken care of, and people of different background(s) can have friendly conversations in peace,” Ak said. “CRC believes in the importance of celebrating the commonalities and respecting differences. CRC also believes in the importance of universal values such as solidarity, peace, human rights, equity, respect, so on and so forth.”

Busra also noted that she looks forward to a future in which further meetings with the community can be held face-to-face to help facilitate a strong and lasting relationship between the center and its neighbors.

“Thank you all again for coming, and everyone else with MCU who has put so much into this, and have a great night,” Busra said, with a guest responding with the term “shalom,” or peace, and a smile.