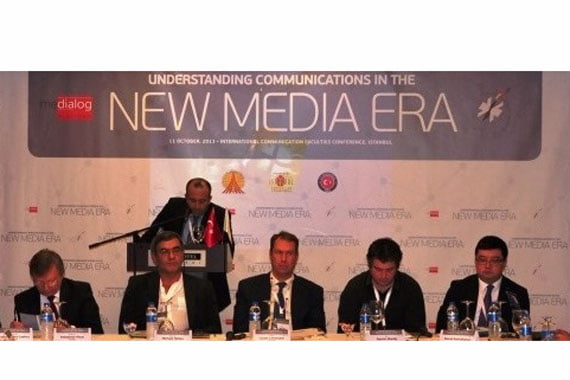 Media representative and academics from some 20 European and Asian countries have come to Istanbul to discuss the status of the digital media in the new era in the conference, “Understanding Communications in the New Media Era.” Participants called for cooperation and dialogue in the process.

During the conference, academics made interesting presentations and exchanged ideas. Tercan Ali Baştürk, the Secretary-General of the Medialog Platform of the Journalists and Writers Foundation (GYV), said: “This conference has evolved into a Eurasian gathering thanks to participation from Europe and Asia. We have brought together many distinguished academics who work on the future of the media.”

Professor Aydemir Okay, the Dean of the Faculty of Communication at Istanbul University, indicated: “This conference was the continuation of the workshop we held last year. The purpose of the conference is to study the change the media go through in the international arena in the digital age and exchange ideas in this regard. We intend to organize similar conferences in future.”

Kazakh TV Deputy General Director Marat Raimkanov, who attended the conference from Kazakhstan, maintained that such conferences would bridge the eastern and western media organizations for cooperation and dialogue. The conference was held in Beyazıt Antik Hotel and attended by participants from some 20 countries including the UK, Kazakhstan, Bulgaria, Ukraine, Portugal, Russia, Greece, Belgium, Hungary, Poland, and Austria.

Gülen touched in his letter to the forum :The principle of objectivity in the media, which he said is often violated worldwide. “Adopting this principle and reflecting this principle in stories require a strong character, a strong culture, a sense of responsibility and an understanding of putting national interests above anything else.