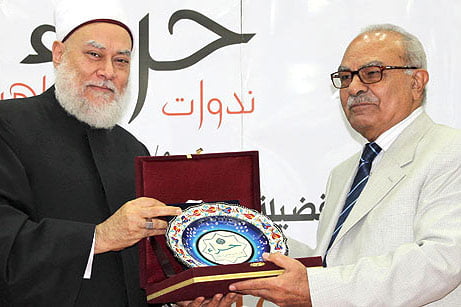 Leading Egyptian Islamic scholar Muhammad Imara has praised Turkey’s Arabic language magazine, Hira, for performing a crucial role in building bridges between the Turkish and Arab world as well as for the humanity.

Imara, one of many respected Islamic scholars writing for the Hira Magazine — Turkey’s first and only Arabic magazine  whose name refers to the cave where the Prophet Muhammad first received revelations from God, was speaking at a widely-attended event in Cairo organized to mark the launch of his latest book titled “The Spirit of Islamic Civilization.”

Expressing pleasure for the publication of his 280th book, Imara said just like the Hira Mountain where Prophet Muhammad received revelations from God, the Hira Magazine serves as a door opening to the spiritual world.

He also said the magazine performs a crucial duty by rebuilding bridges between Arab and Turkish world, which have for many years stayed apart. “Our Turkish brothers remained apart from us for long years,” he said during the high-profile event, which was also attended by Egypt’s Grand Mufti Ali Gomaa.

Stressing that Islam is not the religion of a specific group or class and that it brings all Muslims across the world under one roof, Imara said the Hira Magazine has been working to show this side of Islam and to build bridges for humanity.

Imara also praised similar efforts by the Hizmet Movement (aka Gulen Movement) across the world, which he said is working to spread positive ideas of well-respected Turkish Islamic scholar Fethullah Gülen.

Imara added that the fact that his book, which is composed of his articles published in the Hira Magazine, is published amidst uncertainty in the Arab world caused by the Arab Spring has some special spiritual meaning.

Mustafa Özcan, the head of the board of trustees of the Hira Magazine, also spoke during the event, praising Imara and other Islamic scholars for their works which bring a breath of fresh air to the Islamic world.

Hira is a scientific cultural magazine written in Arabic that appeals to the entire Arab world, from Saudi Arabia to Morocco. Leading Turkish and Arab intellectuals write for the magazine on various issues including religion, culture, arts, literature, human relations, history and civilization.

The magazine is finding growing interest in Sudan, Algeria, Jordan, Syria, Lebanon and Mauritania as well. It is further widely followed in Pakistan, Malaysia and Indonesia. The magazine is printed in Turkey, Egypt and Morocco.

Since 2016, the Turkish Food Festival has brought a variety of Turkish dishes and cultural activities to Greenville. This year, though, due to the coronavirus pandemic, the festival will be serving food in a drive-thru at the Phillis Wheatley Center.