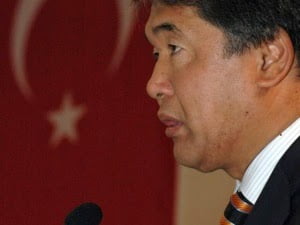 The finals took place at the nation’s largest cultural venue National Filarmonya in the capital Bishkek. The traditional Kyrgyz performance followed by the two countries’ national anthems kicked off the event to witness spectacular shows. The Kyrgyz students’ performances made a hit with the audience.

The Kyrgyz deputy Kurmanbek Dıykanbayev also offered his remarks at the event. “The Turkish schools not only offer quality education but moral values as well. I very much believe, 10-15 years from now, these schools’ graduates will be the deputies, prime ministers and presidents,” the deputy said.

Sebat Educational Institutions Board Chairman Orhan Inandi, who addressed the audience in Kyrgyz language, said, “We would like to thank the Kyrgyz people for their support for our institutions over the past 22 years since 1992.”

Top places in singing, poetry and folk dance categories got their awards as the night drew to a close. Finally, all the participants sang the olympics’ theme song “Yeni Bir Dunya.”

The Turkish Language Olympics have been annually held since 2003 and aimed to reward the Turkish language learners around the world. This year’s “International Language and Culture Festival” will take place on May 31 thru June 15. A total of 2,500 students from 150 countries, out of 196 recognized by UN, will participate in the festivities to be held in 81 cities across Turkey.