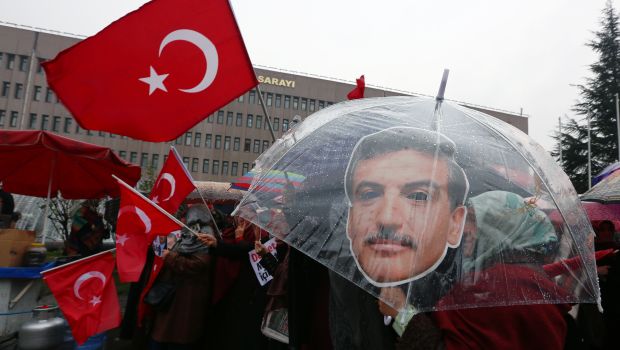 People wear masks of Hidayet Karaca, head of Samanyolu Media Group, as they protest against his detention in Istanbul five days ago, in Ankara, Turkey, Thursday, Dec. 18, 2014. (AP Photos.)

The government of Turkish President Recep Tayyip Erdoğan is falsely accusing anybody that opposes it of treason, a prominent Turkish journalist currently detained in an Istanbul prison told Asharq Al-Awsat.

In a letter addressed to “the free world” and published exclusively by Asharq Al-Awsat, the Turkish Samanyolu TV Group Chairman Hidayet Karaca said: “I write these lines from inside one of the cells of the infamous Silivri Prison in Istanbul to address the free world: In the new Turkey the government can fabricate charges of treason and enmity against any person advocating the values of democracy and basic human rights, whether or not they hold Turkish citizenship.”

Karaca was arrested, along with other Turkish journalists, on December 14 on charges of “forming a terrorist cell.” However Karaca says that the government is targeting him due to soap operas that he wrote and produced and which were broadcast by his TV network criticizing the government.

In particular, the accusations center around a soap opera scrip that casts aspersions on Ankara’s attempts to broker a deal with Kurdish militants by depicting this as an Iranian-backed conspiracy. However Karaca says that his arrest is just one example of an escalating government crackdown on media freedoms in the country.

“You may wonder: What is a journalist doing in prison? The strange situation I went through is the bitter experience many in Turkey have either suffered or will suffer from,” he said.

The move has drawn international criticism against Turkey which stands accused of taking oppressive measures against freedom of speech.

Karaca’s detention has been viewed as a politically-motivated move aimed at cracking down on opponents of the ruling Justice and Development Party (AKP), particularly targeting supporters of exiled Islamist scholar Fethullah Gülen who Erdoğan has accused of running “a parallel state.” Samanyolu TV is has close ties to Gülen’s Hizmet movement.

Arrest warrants were issued for Karaca was other media figures linked to the Gülen movement after several figures from Erdoğan’s inner circle were accused of graft in 2013. The government accuse Fethullah Gülen of being behind the leaks as part of a plan to takeover power in the country.

“We initially gave our full support to the AKP government following the successful reforms it achieved in the field of development, democracy and justice. But the political leadership began to carry out anti-democratic measures in the last few years, splitting from the international community and establishing an oppressive and authoritarian regime of its own while launching a campaign of oppression against international standards of democracy,” Karaca said.

The 51-year-old media mogul accused the government of targeting independent media outlets in retaliation to the publication and broadcast of information implicating several AKP figures in widespread corruption.

“The government has launched a fierce and all-out war against free media. Erdoğan’s administration resorted to implementing illegal procedures in the way of cracking down on media outlets following the exposure of the graft scandal more than a year ago,” Karaca said.

One of the government measures has been to financially squeeze the TV network by intimidating business owners not to advertise on the channel, he added.

“They initially tried to financially undermine our media establishment, and sought to commercially drive us into bankruptcy by threatening those who broadcast commercials on our media channels. Countless heavy fines were also imposed on our TV channels.”

“Artists and the staff of a TV channel are being arrested and charged with terrorism over a soap opera, therefore this is clearly a made-up case,” Karaca said.