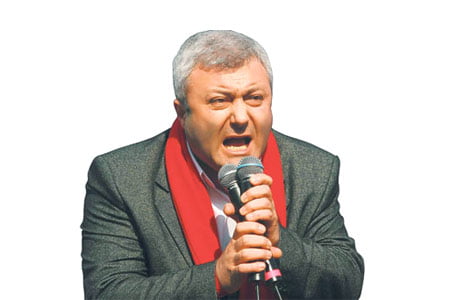 Europe’s top court has said the arrest of chief Ergenekon defendant Tuncay Özkan is legal, rejecting the plaintiff’s complaint that he was deprived of his right to a fair trial.

The European Court of Human Rights (ECtHR) accepted Özkan v. Turkey despite the fact that Özkan had not exhausted all domestic judicial remedies, but rejected some of his core complaints, including his claim that he was denied the right to a fair trial and the legality of his arrest.

The ECtHR defined Ergenekon as a “terrorist organization attempting to topple the government by the use of force” and said it will wait until the judicial proceedings of Özkan’s case are finished. The European court also rejected Özkan’s claim that his right to freedom was violated. His complaint regarding the time he has spent in jail will be assessed later in an interim decision.

The European court also said there is “strong evidence” regarding the existence of the Ergenekon clandestine terrorist organization and rejected Özkan’s demand to be tried without arrest. The court said Özkan’s trial without arrest would make it difficult for security forces to fight organized crime.

ECtHR sources also told the Cihan news agency that Özkan v. Turkey might set a precedent for other Ergenekon-related complaints. The decision is also the first official assessment of the European court with respect to Ergenekon. Ergenekon is a clandestine network of individuals who appear to be nested within the state hierarchy and who are currently on trial for multiple counts of murder and causing public disorder that ultimately aimed to overthrow the ruling Justice and Development Party (AK Party) government.

The court said Özkan was deprived of his freedom for being a member of a terrorist organization aiming to topple a democratically elected government. It also added that Özkan seized many documents that belong to security forces, directed a TV channel that broadcast programs designed by Ergenekon and kept a bomb in his own home.

The European court judges also said there are telephone transcripts of conversations between Özkan and military members of Ergenekon that strengthen the evidence against him and underlined that his arrest is legal. The Strasbourg-based court added that the arrest of Özkan by Turkish judicial authorities is based on “tangible evidence” and “legitimate reasons.”

Özkan, the former owner of the Kanaltürk TV station, was detained in İstanbul in late September 2008 as part of an investigation into Ergenekon. The court said Özkan’s arrest is not in violation of the European Convention on Human Rights (ECHR).

The European court also rejected Özkan’s allegation that he is not aware of what he has been charged with, claiming that İstanbul police informed him that he was under arrest for being a part of a coup plot and that he had been sufficiently informed of the accusations against him so as to be able to defend himself.

Note: This news seems unrelated with Hizmet Movement (aka Gulen movement) but it is. Some people and groups, especially ultra secular media, has tried to convince that Hizmet movement is behind the Ergenekon arrests, which are claimed to be unfair. The decision below by European Court of Human Rights proves that prosecutors have acted legally, stayed within legal boundaries and were not directed by any person or groups and arrests were based on “strong evidence”.