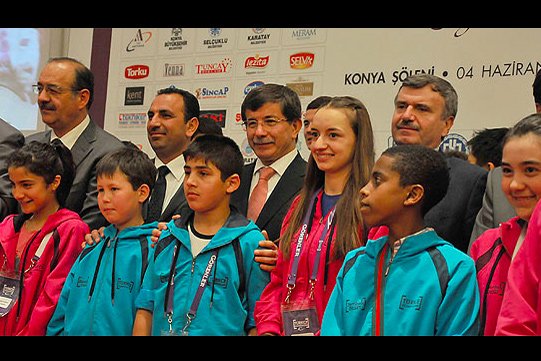 Davutoğlu joined the 10th International Turkish Olympiads activities on Monday in the province of Konya and delivered a speech during the gala dinner at the Konya Rixos Hotel. In his speech Davutoğlu expressed his joy at seeing children of different nationalities traveling to Turkey to recite their poems and songs in various parts of the country, saying it would be enshrined in the memories of the Turkish people.

He described the participants as people taking to the road to disseminate love, peace and equality around the globe. “God bless the people who organize, assist and contribute to these activities, in particular Fethullah Gülen, for his inspiration,” Davutoğlu said.

The 10th International Turkish Olympiads, which brings together hundreds of foreign students each year from Turkish schools established throughout the world, is preparing to offer glorious performances from 1,500 foreign students representing 135 countries this year.

Another event held as part of the Olympiads was a three-day-long exhibition of stalls showcasing the dress and cultural symbols of different cultures. The exhibition, which ended on Monday, was held at the İstanbul Expo Center (IFM) and attracted nearly 600,000 visitors. A stall was set up for each of the 135 countries at the event to promote an understanding of different cultures. One visitor to the exhibition, Mustafa Erdoğan, founder and artistic director of the dance company Anadolu Ateşi, said that this is the first year he is following the Olympiads and he is greatly moved by what he has seen so far. “It is like I am traveling the world here in this exhibition,” he said.

On Monday, 65 foreign students from 25 countries, who have come to Turkey’s Bursa province for the Olympiads, toured the province ahead of their performances in the evening, an event also attended by Deputy Prime Minister Bülent Arınç. Touring the province with their nations’ flags in their hands, the students were welcomed by locals, who showed their love and support by applauding the participants. Receiving students at his office, Mayor of Bursa Şahabettin Harput congratulated the students for their success in learning to speak Turkish fluently in a short time. “It is a source of great pride for us to see a Kenyan boy singing a Turkish song so well,” he said. Students then paid a visit to the office of Bursa Chamber of Trade and Industry (BTSO) President Celal Sönmez. Sönmez, in return, presented the students with tablet PCs to show his pleasure at their visit.

Diyarbakır Governor Mustafa Toprak has stated that the children coming together in Turkey from all over the world are building bridges for peace. “Through the Olympiads students coming from different countries integrate with each other, they get to know each other’s culture and countries by sharing, and as a result of this exchange a bridge of peace is erected between states,” Toprak said on Monday.

Coming to Turkey to attend the Diyarbakır tour of the 10th International Turkish Olympiads, students from Bosnia and Herzegovina, Gabon and Kenya visited Toprak at his residence. Following a frank dialogue between the students, Toprak noted that such events are vital to introduce the world to Turkey and for Turkish people to learn more about world cultures. The students, who are able to speak many languages, impressed with their exceptional Turkish. They told Governor Toprak that Turkish is the easiest language to learn.