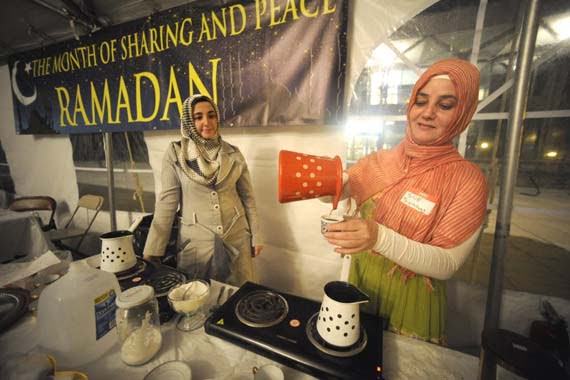 Inside the Ramadan Dinner Tent at Payrow Plaza, Sunay Yerdelenli, right, and other women prepared Turkish coffee after the meal.

About 100 Americans and Turks broke bread and baklava last week in Bethlehem.

The 10th annual Intercultural Dialogue and FriendshipRamadan Dinner celebrated the ninth month of the lunar Islamic calendar on Wednesday and Thursday nights in Bethlehem.

Hosted by Lehigh Dialogue Center, a program of prominent speakers and chanted prayer began at 7:30 p.m. Istanbul Grill on Broad Street served dinner at 8:15 p.m. alongside traditional Turkish coffee and Turkish delights from the LDC.

The event was free and open to the public. Other organizers and sponsors of the event were Peace Islands Institute, Turkish Cultural Center Pennsylvania and the City of Bethlehem.

A tent in Payrow Plaza, formerly known as Bethlehem City Hall Plaza, channeled traditions from the Mediterranean where tents are often set up in the streets of Turkey for people who cannot get home soon enough before sunset to break the fast during Ramadan, says Murat Al, of Bethlehem, who moved to the U.S. from Samsun, Turkey, and is a member of the Lehigh Dialogue Center.

The dinner included traditional Turkish cuisine. Red lentil soup is popular for breaking the fast before eating heavy food, says Sunay Yerdelenli, of Easton, who moved from Turkey to New Jersey in 1995.

The meal’s rice, a staple in Mediterranean and Middle Eastern cooking, is cooked in corn oil, butter and ground orzo for a smooth taste, according to Yerdelenli. The ground beef kebab, known as Adana Kofte in Turkey, is cooked with smashed onions and peppers.

The event’s invitation stated that its intent was to “raise awareness about the importance of interfaith and intercultural dialogue in the greater Lehigh Valley and Northampton area.”

“Everybody is here for freedom, but we don’t want to forget our culture,” says Omer Alici, president of the Lehigh Dialogue Center.

According to their mission statement, members of the Dialogue Center aim to bridge cultures between Muslims and non-Muslims alike in the community.

Muslims around the world fast from sunrise to sunset during the month of Ramadan, according to leaflets handed out by the Lehigh Dialogue Center. This year, Ramadan began the evening of July 19 and will end the evening of Aug. 18.

Ramadan is a holy month to Muslims, who believe that during this time the holy book Quran was sent down from heaven to lead people to salvation, according to TheEid.com.

Fast breaking time is a holy moment during each day of Ramadan, which unites communities around the world during Ramadan/Iftar dinners, according to the Lehigh Dialogue Center.

Al, who is studying for a doctorate degree at Lehigh University, sees a good relationship budding between Americans and the Turks.

“I hope the friendship will go on where we embrace our differences and similarities in a friendly atmosphere,” he says.

Bethlehem Mayor John Callahan, who attended the Ramadan Tent Dinner says he sees significance in uniting cultures of the East and West.

The event was appropriate in Payrow Plaza, where the Christmas City displays a nativity scene and where a menorah lighting has taken place since 2009 during the winter holiday season, Callahan says.

To close the night, Yerdelenli and younger women in the Turkish community brewed traditional Turkish coffee, a small, strong cup of coffee with cardamom.

The women wore flowing scarves to symbolize their devotion to God and to share the latest fashion trends in Turkey of intricate designs and vivid color.

The Lehigh Dialogue Center also hosts trips to Turkey. Its annual 10-day summertime tour of Turkey took place June 15 to June 25 this year. Roseann Bowerman and her husband Douglas, of Bethlehem, went on the tour and stayed an extra two days to take in the air of the East, she says.

“The group that is hosting us tonight and [hosted] the trip very much emphasizes intercultural and interreligious understanding,” she says.

The family connection in the East, Bowerman observes, is often lost in the West. In Turkey and other parts of the Mediterranean and Middle East, generations enjoy being together, whereas the idea of the extended family isn’t as common in the U.S. Events such as the Ramadan Tent Dinner are inspiring unity, bringing families from the East and the West closer together, Bowerman says.

Murat Guzel, a delegate for President Barack Obama, moved to Bethlehem from Malatya, Turkey. He owns Smart Juice, an organic juice company in Bethlehem. He, too, appreciates Ramadan as a time of generosity.

“Since we’re all human, we love to host people and we want to host our neighbors,” says Guzel. “We need to use Ramadan as a chance to start (getting involved) in our community matters and volunteer time and donate generously.”

For more information on the Lehigh Dialogue Center, including its upcoming events and cooking classes, visit lehighdialogue.org.

Lehigh Dialogue Center will also host keynote speaker Dr. Christian S. Krokus at 7 p.m. Aug. 16 at the Holiday Inn Allentown, 7736 Adrienne Drive. The professor is from the Department of Theology/Religious Studies at the University of Scranton. Registration is required by Aug. 14 by contacting 610-871-0562 or [email protected].

Many members of the Lehigh Dialogue Center see the month of Ramadan as a time to be generous and give back to the community.