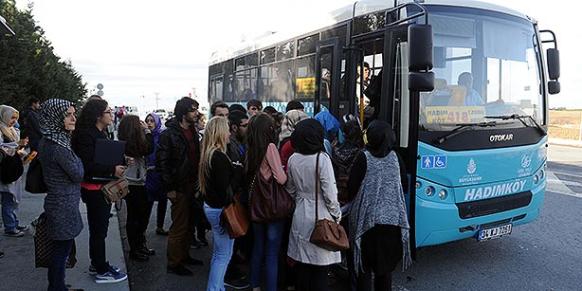 Many Fatih University students had to take an alternative bus to get to their school. (Photo: Today's Zaman, Akif Talha Serttürk)

An official from İETT, İsmihan Şimşek talked to Today’s Zaman and admitted that the 76F bus line had been canceled, but dismissed the idea that the decision deliberately targeted Fatih University. According to her, following analysis of demand for bus services in the region, the 76F bus line was discontinued while two other lines, HT18 and 418, continue to run with stops at Fatih University.

A social media campaign launched by students of the university followed İETT’s decision. According to figures from İETT, 42 vehicles are currently allocated for the two bus lines that include stops at Fatih University.

İETT argues that the cancelation of a specific bus line to the university is solely due to supply and demand. Asked whether there were similar examples, Şimşek cited the 37A, Y1 and MR3 lines that were canceled with the start of the winter travel schedule in İstanbul.

Anxiety about the Hizmet movement increased over the summer when the İstanbul Metropolitan Municipality removed signs and advertisements of Hizmet-affiliated schools.