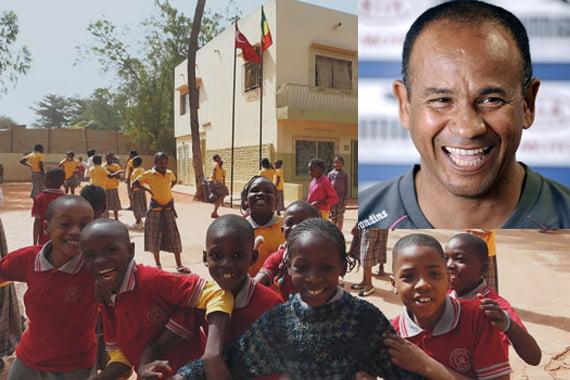 A total of 2,500 students are provided with high-quality education in Turkish schools in Mali

Former Beşiktaş coach Jean Tigana of France has said he will donate a fully equipped computer lab to a Turkish education complex currently being constructed in Mali’s capital, Bamako.

A large educational facility is being constructed on 14 acres of land by Turkish education volunteers in Bamako. While the construction of the school, which will be situated along the Niger River, which runs through Bamako, is still in progress, the volunteers were delighted by the unexpected support from French coach Tigana for the education complex.

The land that the school is being constructed on previously belonged to Tigana, who is of Malian origin. Tigana first drastically reduced the price of the land after he learned that a Turkish educational complex would be built there and then promised to sponsor the construction of a fully equipped computer lab in the school.

In an interview with Today’s Zaman in 2008, Tigana, who was the coach of Spor Toto Super League side Beşiktaş between 2005 and 2007, expressed his support for Turkish schools established in Africa. Praising such schools, Tigana had stated: “There are many Turkish schools across Africa. These schools carry great importance for Africa. Education is a long process. If you want to develop a country, a good education is indispensable.”

The Turkish education complex, named College Horizon, will consist of primary, middle and high schools and will provide education to a total of 900 Malian students.

The education services that are provided by Turkish education volunteers in Mali, which is suffering from civil war, have been met with appreciation by Malian administrators and people. There are many schools established by Turkish education volunteers across Mali. There are four nurseries, four primary schools, five middle schools, three high schools, one reading hall — a facility offering free education and training to disadvantaged and undereducated children — one cultural center and two dormitories established by Turks in Mali. A total of 2,500 people are provided with high-quality education in these Turkish schools.