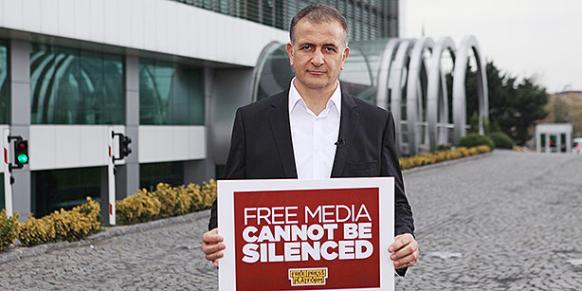 On Thursday prosecutor Hasan Yılmaz, who is in charge of an investigation targeting journalists, television scriptwriters, former police chiefs, and producers and directors of a TV series were taken into custody on charges of being members of a “terrorist organization” formally objected to last week’s court decision to release Dumanlı and seven others pending trial on terrorism charges.

Dumanlı was one of the dozens of people detained on Sunday, Dec. 14, in an operation that was widely condemned at home and abroad as a crackdown on critical media. In addition to Dumanlı, the general manager of Samanyolu television and a columnist for the Bugün newspaper were also detained as part of an investigation of an alleged conspiracy in a 2010 police operation against a radical Islamist group.

Dumanlı and most of those detained were released pending trial, while Samanyolu General Manager Hidayet Karaca and three former police chiefs were sent to jail to await trial.

The prosecutor’s request for the reversal of the decision to free Dumanlı came only several hours after a mysterious Twitter account user with the pseudonym of Fuat Avni wrote that taking Dumanlı back into custody had been ordered directly by President Recep Tayyip Erdoğan.

The whistleblower, who professes to be from the inner circle of Erdoğan’s administration, wrote on Wednesday night that Erdoğan had ordered his team to arrest Dumanlı “no matter what.”