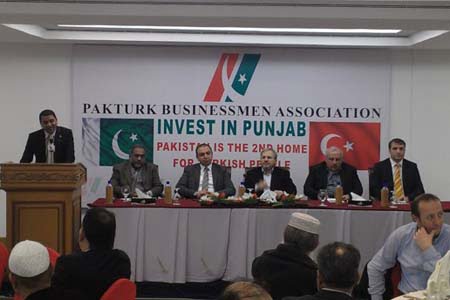 Huge trade and investment potential exists between Pakistan and Turkey and Dr Muhammad Iqbal University will be established in Lahore with Turkish collaboration. This was stated by Mr Taner Kocyigit, Secretary General Pak-Turk Businessmen Association (PTBA), while addressing members of the Faisalabad Chamber of Commerce and Industry (FCCI) on Monday.

Highlighting the objectives of the Pak,Turk Businessmen Association, he said the association worked for promoting business relations among both countries.

The association has 65 members on its fold and serves 45,000 members of Tuskon, a high-level Turkish organization, to promote business opportunities for its members, he added. He said PTBA had been engaged in Pakistan since 1995 and was running 22 schools in different cities of Pakistan under a centralized education system up to higher secondary level.

He said that soon a Memorandum of Understanding (MoU) would be signed with FCCI and offered membership of PTBA to all members of FCCI from Lahore office till a regular office of the association was functional at Faisalabad. He said PTBA intended to establish Turkish Cultural Centre, Turkish Language Centre and Pak Turk School in Faisalabad in 2014 and more projects would be launched in Faisalabad in collaboration with FCCI.

He said that PTBA had motivated Turkish businessmen to invest in Pakistan and after the general elections in Pakistan, many Turkish investors might invest in Pakistan in Halal meat, livestock and dairy sector, agriculture, textile, education and other sectors. He said that Dr Iqbal University would be established in Lahore on a par with Cambridge University where education in many disciplines including engineering and medical would be imparted. He lauded investment made by Turkish investors in Pakistan.—APP

Sher Alam Shinwari  PESHAWAR: Provincial minister for Schools and Literacy Sardar Hussain Babak has called for help and assistance in all sectors to international donor agencies and Turkey government. Turkey he said was a time-tested friend of Pakistan and both the countries enjoyed excellent bilateral relationship and deep cultural ties. He was addressing as chief guest at a gathering […]