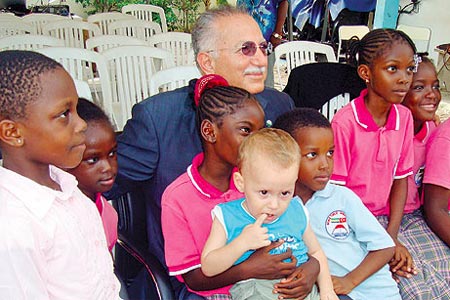 Stressing that he has always endorsed the philosophy behind these international schools, Ekmeleddin İhsanoglu said, “I had a chance to visit these schools in Central Asia, Africa and the US. I was impressed by their performance. This is a real success story.” The Turkish-Gabonese International School was established by Turkish volunteers and businesspeople in 2008. It had only two students in its first year but has reached full capacity, with 106 students currently enrolled today.

The Turkish-Gabonese International School in Libreville is not only helping bilateral relations between Turkey and Gabon but also improving ties between Gabon and the Muslim world, says the head an organization of 57 Muslim countries. During his visit to the school on Thursday, Ekmeleddin İhsanoglu, the general secretary of the Organization of Islamic Cooperation (OIC), praised the school for contributing to the development of friendly relations between the two OIC member states, adding that it has also helped improve the relations of Gabon with the outside world in an era when international cooperation is a vital practice.

“We are looking to build a new school complex to accommodate growing demand,” says Ercan Yilmaz, the school’s general director. Officially known by its French name, Ecole Internationale Turco Gabonaise, the school was established at the request of Gabon President Ali Bongo Ondimba, who was impressed by the quality of Turkish educational institutions in other African countries. When he was defense minister in 2007 he asked the OIC head to help him get in touch with Turkish volunteers to build such a school in Libreville. İhsanoglu soon made it happen.

“I make a habit of visiting Turkish schools in countries I visit, but this school has a special meaning for me,” Ondimba said to the audience gathered in the school courtyard.

The OIC head was visibly moved and had tears in his eyes when students put on a special performance for him and his entourage. He stressed that the best thing for him is to see the fruits of his and others’ endeavors in only four years’ time. “I hope to see a larger building next time I visit Gabon so that they can accommodate more students,” he added.

The Turkish-Gabonese school has six teachers from Turkey and employs some 20 local staff. The teachers make up most of the Turkish community in Libreville, which numbers around 10 people including the newly arrived staff of the Turkish Embassy that was opened three months ago. The school has classes from pre-kindergarten to ninth grade and continues to add one grade every year.

President Abdullah Gül also visited the school during his visit to Libreville in March 2011 and was entertained by performances by a group of students.