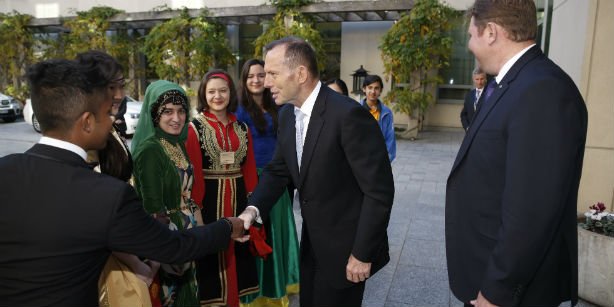 Australian Prime Minister Tony Abbott received 60 students from 19 countries at his office who came to Australia as part of the 13th International Language and Culture Festival. (Photo: Cihan, Zafer Polat)

Abbott hosted the students at his office on Monday after Australian Governor-General Peter Cosgrove hosted the group at his official residence with his spouse, Lynne Cosgrove, on Saturday.

During their visit, the children sang the theme song of the organization that organized the festival, titled “Dünyanın Renkleri” (Colors of the World). After listening to the song, Abbott said it underlined the importance of multiculturalism and praised the initiative’s contribution to world peace. Expressing gratitude on behalf of his country that it hosted a part of the 13th International Language and Culture Festival, the Australian prime minister said it is meaningful for children from across the world to sing a song on peace together. He also thanked the children’s teachers for their contribution to the organization.

Australia on Sunday for the first time hosted the International Language and Culture Festival. The festival was organized by Sirius Educational Institutions, which have been active in Australia for years.