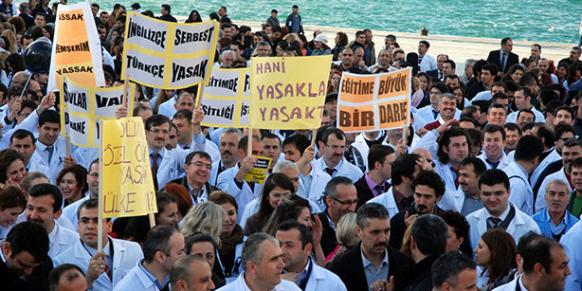 A draft bill, addressing UNESCO’s Convention against Discrimination in Education, is still waiting to be approved by the Turkish Parliament. This legislation includes measures to address inequality and poverty on the basis of income distribution and its adverse effects on education. It was prepared by the government in 2009 and was opened to public discussion in 2010.

The convention also proposes to make educational opportunities equally available and to standardize the quality of the education system. All limitations on education are banned, including those which most commonly affect low-income populations.

There have been no concrete steps taken to formalize equality of education or to prohibit discrimination in Turkey, despite positive developments such as the proposed legislation which also mentions the induction of independent bodies to monitor schools and enforce standards. While formally adopting this legislation and imposing sanctions on the education system could be a turning point for the country, regulations have not yet been implemented, as UNESCO emphasized in a recent UN Human Rights Council report.

During the Universal Periodic Review (UPR) of Turkey’s record at the council, the Turkish delegation, led by Deputy Prime Minister Bülent Arınç, failed to respond to many questions about discrimination and human rights put forth by UN member states, especially those asked by countries in the European Union.

The UPR is a forum for countries to discuss human rights issues, and many concerns were raised about human rights in Turkey. For almost a decade, many students, their families, teachers, schools and school administrators have been victims of discrimination at the hands of the ruling Justice and Development Party (AK Party) and then-Prime Minister Recep Tayyip Erdoğan.

The education system in Turkey has suffered a universal drop in quality. The AK Party’s policies have caused extensive, persistent problems in the system, disrupting it with what were apparently politically motivated and unplanned changes.

The AK Party insists on shutting down prep schools in spite of strong public resistance. Last October, the government introduced a bill that included amendments to Law No. 5580 on Private Educational Institutions and it was sent to the Parliament Speaker’s Office in February. Experts maintain that only a prep school education can resolve critical problems experienced by students in public schools. These private teaching institutions, known as dershanes, are considered by many to be invaluable as they allow children from poverty-stricken families to succeed in school. More than 4,000 prep schools around the country have played an important role in improving the quality of education and have helped underprivileged high school students earn high marks on university entrance exams.

Speaking to Sunday’s Zaman, Sakine Esen Yılmaz, secretary-general of the Education Personnel Union (Eğitim-Sen), made clear that even if some children are underperforming in exams, families can’t cover the cost of private lessons and coaching. “Cash credits the government announced they would provide, ranging from TL 2,550 ($1,012) to TL 3,550 ($1,409) per student, do not provide enough support for the average family to send their children to private schools.” Yılmaz also emphasized that the only families to benefit from this incentive program are those who can already afford annual private school tuition, which ranges from TL 15,000 ($5,955) to TL 20,000 ($7,940).

In the South and Southeast, the faith-based Gülen movement, or Hizmet, administers a network of more than 500 educational establishments in order to discourage Kurdish children from joining the PKK (Kurdistan Workers’ Party) as militants, and to provide them with opportunities they might not otherwise receive. Still, only 25 percent of private schools, representing approximately 1,000 dershanes and employing about 20,000 people, are related with the Gülen movement, including a number of small and medium-sized pre-schools as well as prominent institutions that cater to older students.

Speaking with Sunday’s Zaman, Eyüp Kılcı, the vice president of the Güven Preparatory Schools Owners Association (GÜVENDER), said, “The extent of regional income inequality still strikes down the opportunity for equal education in Turkey.” Kılcı stressed that because of their affordable fees, dershanes are regarded by low-income families as the main provider of equal opportunities for education. Representatives from civil rights organizations state that, if not for these dershanes, students attending public schools in the region would likely earn significantly lower scores on university entrance exams, as public schools in the east are much less qualified than those in the west.

The attempt to shut down prep schools comes at a time when the Gülen movement is being subjected to a smear campaign by the government. Since graft allegations against then-Prime Minister Erdoğan and many high-ranking government officials first emerged when probes were made public on Dec. 17 and 25, 2013, Erdoğan and his supporters have gone to great lengths to conceal their implication in the sweeping corruption scandal. As a part of this attempt, they have accused the Gülen movement of attempting to topple the government and have maligned affiliated institutions, including Bank Asya, the Zaman daily and preparatory schools.

Environment and Urban Planning Minister Erdoğan Bayraktar, in a harsh statement, claimed that he had been pressured to submit his own resignation to save the prestige of the government, adding that the prime minister should also quit as most of the amendments on construction plans mentioned in the corruption investigation were made on Erdoğan’s orders.