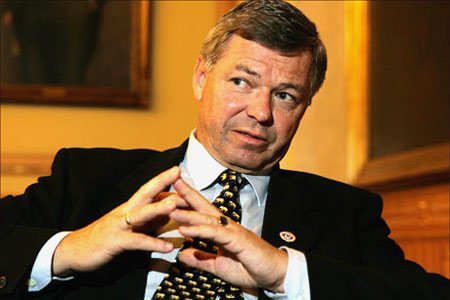 Former Norwegian Prime Minister Kjell Magne Bondevik has said the ideas of Fethullah Gülen, a Turkish-Muslim scholar, and the activities of his movement are in complete harmony with the approach of The Oslo Center for Peace and Human Rights, which Bondevik currently heads. Bondevik yesterday paid a visit to the En Verden i Dialog (EVID, A World in Dialogue), an institute established jointly by Norwegians and Turkish immigrants in Norway, where he was briefed about the institute’s activities.

“I was impressed with all activities in all fields in the Gülen network. And I think many of his ideas are in full line with my own thinking and also with the strategies of The Oslo Center for Peace and Human Rights, where I am president. We both believe in dialogue, in respecting and trying to understand each other, in building bridges between main cultures and religions. Currently there is high tension between the Islamic world and Western world. And increase of this tension could be dangerous and catastrophic. We must avoid that. And we must do this by bringing people together using dialogue instead of the rhetoric of war,” he said.

Voicing his appreciation for the dialogue activities of EVID, he said: “It is very impressive that you have achieved so many things in such a short time in the name of peace and dialogue. Seeing your activities in Norway and all around the world, I look to the future with greater hope.”

Providing some information about the activities of The Oslo Center for Peace and Human Rights, he said the center treats three things as priorities — engaging in different intercultural and inter-religious dialogues with the participation of politicians, helping to maintain democracy and coalition-building in countries with new democracies such as Morocco and Kenya and organizing events to raise awareness about human rights in countries such as North Korea and Myanmar.Bondevik, a former priest, also focused on the current political developments in Turkey and commented on the charges against Prime Minister Recep Tayyip Erdoğan of engaging in anti-secular activities.

When asked whether the principle of secularism was under threat in Norway during his term as prime minister because he was a religious man, Bondevik replied: “No, I think that we must build on tolerance, and that means that people, of course, can have their faiths and can express their faiths. One can be an open believer and at the same time be a politician. Of course, there are differences between state and church and faith communities. Political bodies should be run by politicians, and faith communities should be run by religious leaders.”

Bondevik served as prime minister of Norway from 1997 to 2000 and from 2001 to 2005, making him Norway’s longest serving non-socialist prime minister since World War II.