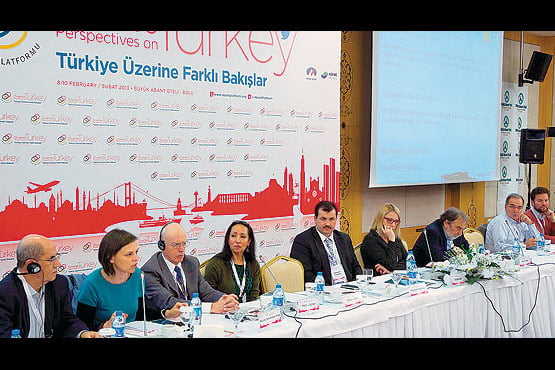 Intellectuals, scholars and journalists participated in the Abant Platform, which ended with a final declaration calling for a new constitution. (Photo: Cihan, Emrullah Albayrak)

Participants of the three-day-long Abant Platform meeting have emphasized the need to finish drafting a new constitution, stressed the importance of a state that is equidistant to all beliefs and underlined the significance of reviving Turkey’s membership talks with the European Union.

Long a byword for describing a gathering that attracts a diverse range of intellectuals, scholars and journalists, the Abant meeting, which took place on the shores of Lake Abant, ended with an announcement of a final declaration that called for a new constitution and the continuation of the EU membership process.

The final declaration underlined the importance of the recognition of the multicultural reality of Turkey as well as the essential role of Turkey “for the security of Europe.” The declaration described Turkey as “indispensable for peaceful coexistence between the Muslim world and the West.”

In terms of the EU process, the declaration argued that visa liberalization would provide an “important opportunity to rebuild confidence and revive the accession process.” The value- and democracy-based nature of the EU along with its economic dimension was emphasized.

The participants recognized that the EU process is hindered by a severe lack of trust and leadership on both sides and that politicians have not done a good job informing the public of the benefits of membership and shaping public opinion.

A recent survey conducted by Boğaziçi University revealed that Turks are increasingly distancing themselves from Europe as their patience has begun wearing thin following a series of snubs by the 27-member club in Turkey’s bumpy road toward full accession. According to the survey, only 47.1 percent of respondents said they have a positive view of the EU, a more than 20 percent decrease since 2003, when the number was 69.3 percent.

The declaration said prejudices toward Turks, rising Islamophobia in Europe and the hostile attitudes of some European leaders have caused much frustration in Turkey. The document also stressed that the bloc maintains its importance for Turkey’s future and that while it is normal for Turkey to look for various international organizations of cooperation, notwithstanding some problems in the process, the EU remains indispensible for Turkey.

The declaration noted that no chapter has been opened since June 2010 and that the status quo cannot be maintained forever, adding that unblocking some chapters would give new momentum to the process.

Turkey opened accession talks with the EU in 2005, but progress has been slow since then due to the Cyprus dispute as well as opposition to Turkey’s membership by some member countries, including France and Germany. Of the 35 chapters that must be successfully negotiated by any candidate country as a condition for membership, only 13 have been opened by Turkey, 17 have been blocked and four have not yet been opened. Only one, on science and research, has been provisionally closed.

The final declaration adopted in the Abant Platform also supported the latest peace initiative of the government on the Kurdish issue. While stating the importance of a peaceful way to solve Turkey’s decades-long problem, the Abant Platform called for the inclusion of guarantees for equal citizenship in the new constitution.

The document also emphasized the need to adopt a new constitution, which it said should reflect general expectations of the citizens as well as the international agreements signed by Turkey like democratization, human rights, equal citizenship, rule of law, accountability of the state, civilian control of the military and decentralization.

It urged the replacement of the current constitution in its entirety before the next general elections. The declaration added that the latest government initiative to solve the Kurdish problem in a peaceful way should be supported and that it should include guarantees for equal citizenship in the new constitution.

“In any official text,” the declaration said, “there should not be any sociological definition of Turkish citizenship.” It said the only reference should focus on “citizenship of the Republic of Turkey.”

With a strong emphasis on democratization, the Abant Platform called for the right of dissent, robust and independent civil society, freedom of expression, freedom of the media, inclusive participation, academic freedom and criticism of state practices.

The final declaration also has an article on providing more social justice and strengthening the rights of workers. It reads that unjust income distribution is a major threat to democracy.

During the three days, participants discussed the issues of identity in Turkey, Turkey’s foreign policy and its regional role, the EU process, the new constitution and inclusive democracy in Turkey.

Election threshold in Turkey should be lowered

In the inclusive democracy session, participants criticized the lack of women’s involvement in politics in Turkey.

Another issue there was a consensus on was the high electoral threshold in the Turkish electoral system which blocks the representation of all groups in Parliament.

While Rainer Brömer from Fatih University and Hans Köchler, president of the International Progress Organization, encouraged the lowering of the threshold in Turkey, seasoned columnist for the Sabah daily, Nazlı Ilıcak, said the threshold is a result of past negative experiences in Turkey that resulted in political instability.

Ilıcak also added that in Turkey, Kurds and the religious segments of society have been the groups that are excluded in Turkey the most. She referred to the Merve Kavakçı case to explain the obstacles in front of becoming a member of Parliament with a headscarf despite no legal ban on the issue. Kavakçı, an elected member of Parliament from the Virtue Party (FP), was expelled from Parliament in 1999.

İhsan Yılmaz from Fatih University criticized the religious majority in Turkey. Arguing that religious groups have also began to have a state-centric outlook, Yılmaz warned against it as he emphasized the importance of justice in Islam. He criticized Muslims for not having a global human rights organization.

Calling inclusive democracy a concept that is used for groups that are discriminated against, Uğur Kömeçoğlu from Süleyman Şah University said that in Turkey, Kemalists are the ones who have not been subjected to any discrimination.