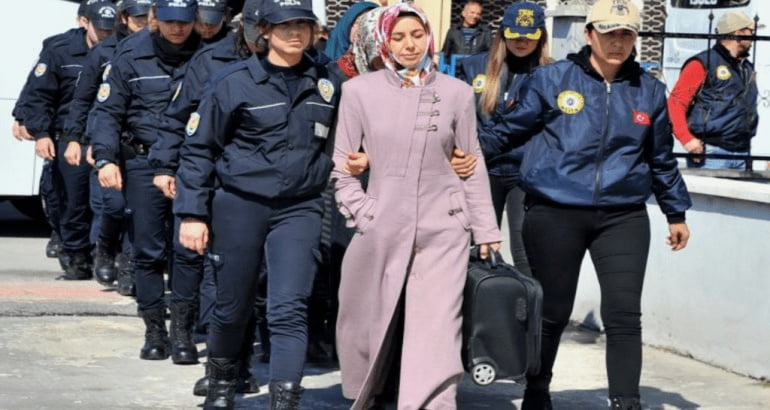 The Turkish government detained more than 70 women on Wednesday evening in five provinces across Turkey as part of a Balıkesir-based investigation targeting alleged members of the Gülen movement.

According to a report by online news outlet Kronos, 600 police officers took part in the operations led by Balıkesir Police Director Cengiz Zeybek and conducted raids to the 63 addresses in İzmir, Manisa, Uşak, Denizli and Balıkesir provinces. Police detained more than 70 women over their alleged links to the Gülen movement during the raids.

It was claimed that the detained women have been helping financially to the relatives of those who were jailed or escaped from the persecution of the Turkish government over their alleged links to the movement. The detained women were allegedly visiting frequently the families of the victims of the Turkish government led by autocratic President Recep Tayyip Erdoğan which has conducted a massive post-coup witch hunt campaign against the alleged members of the Gülen movement.

On Tuesday, at least 13 women were also detained by police over their alleged ties to the Gülen movement in a Karaman-based investigation. According to reports in Turkish media, Karaman Chief Prosecutor’s Office issued detention warrants for 18 women over their participation in the Gülen movement’s activities on March 22. Police carried out operations in 11 provinces and have detained 13 of them so far, according to media reports on Tuesday. Out of those 13 detained, 5 were later released on judicial control.

Women who have been jailed in an unprecedented crackdown have been subjected to torture and ill-treatment in detention centers and prisons as part of the government’s systematic campaign of intimidation and persecution of critics and opponents, a report titled “Jailing Women In Turkey: Systematic Campaign of Persecution and Fear” released in April 2017 by SCF revealed.

In several cases, women were detained in the hospital immediately after the delivery of a baby and before they had a chance to recover. Many women were jailed as they were visiting their imprisoned husbands, leaving the children stranded in the ensuing chaos.