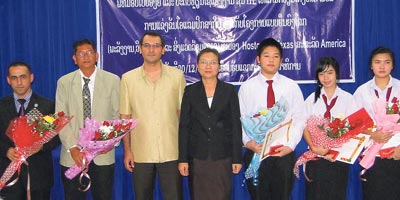 Laos, officially the Lao People’s Democratic Republic, has honored a Turkish school, the Eastern Star Bilingual School, with its highest state medal for the school’s excellent performance in an international olympiad.

The medal was bestowed upon the school by the republic’s president, Choummaly Sayasone, and was presented at a ceremony hosted by the Ministry of Education of Laos. The president also sent a letter of thanks to the school administration.

Laos Deputy Minister of Education Sengdeuane Lacthathaboun spoke at the ceremony, presenting the medal to the school on behalf of the Laotian president. “The school’s success at the olympiad is a first in the history of Laos. The school has proven that our students are able to succeed in the international arena,” he noted.

The minister also presented the school administration with thank you letters penned by the prime minister and the minister of education. He later presented awards to students at the Eastern Star Bilingual School for their performance at the olympiads.

The students won an honorable mention in the Senior Energy category at the 2009 I-SWEEEP, the International Sustainable World — Energy, Engineering and Environment — Project Olympiad, which is a science fair open to high school students The contest aims to create an educational platform for young researchers to present their innovative projects taking on today’s challenges in energy, engineering and environment.

CAVANŞIR GADIMOV, İSTANBUL Turkish civil society organizations active in Somalia show marked differences with their Western counterparts, as the former donate directly to Somalia rather than through international bodies and have a presence in the country for no other purpose than helping “their brothers and sisters in Somalia,” the country’s minister for human development and […]