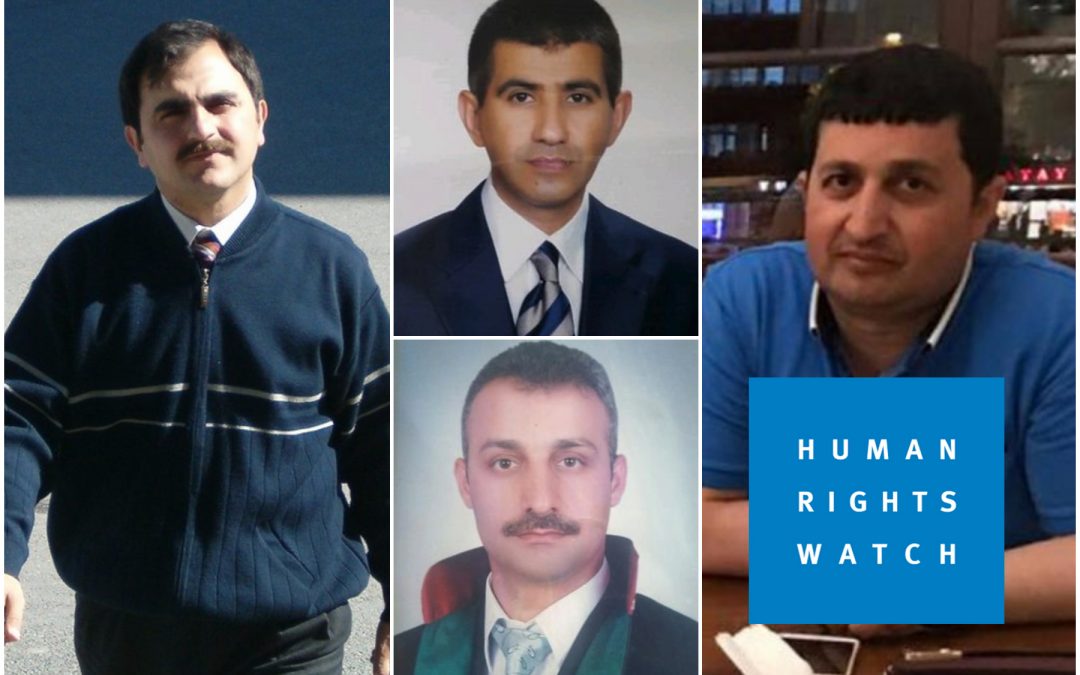 Human Rights Watch (HRW) on Thursday called on Turkish Justice Minister Abdülhamit Gül in a letter to investigate the abductions and disappearances, which may have been enforced, in Ankara of at least four men, who have been missing since March 2017.

“There are credible grounds to believe that government agents forcibly disappeared the missing men. The Turkish authorities should promptly uphold their obligation to locate the missing men, who may be in grave danger, secure their release and if they are in custody give them immediate access to a lawyer, and let their families know where they are,” said Hugh Williamson, Europe and Central Asia director at HRW.

According to HRW, the similarities between the abductions of missing persons and the fact that one of them was later found to have been detained by the police show that Turkish security forces or law enforcement agents might have a role in those abductions and “enforced disappearances,” which is defined as the state detaining or restricting the liberty of someone but refusing to acknowledge it and keeping it confidential, depriving individuals of their legal rights.

HRW refers to the cases of Önder Asan, Turgut Çapan, Mustafa Özben, and Cemil Koçak, all of whom were dismissed from their jobs under state of emergency government decrees and describes the similarities in the abductions such as a black Volkswagen Transporter van into which Asan, Özben and Koçak were bundled into at different times as reported by witnesses and shown by security camera footage.

“The Turkish authorities should urgently demonstrate their commitment to upholding the absolute prohibition on enforced disappearances and ensure prompt and effective investigations into security forces, intelligence services and all other public officials alleged to have unlawfully deprived individuals of their liberty and tortured or otherwise ill-treated them,” said HRW.

Main opposition Republican People’s Party (CHP) İstanbul deputy Sezgin Tanrıkulu submitted a parliamentary question to Prime Minister Binali Yıldırım in June about the fate of seven people kidnapped in Ankara and the legal procedures concerning them. No response was given by the government.

Recalling that one person was kidnapped in Ankara before the coup attempt and six after it in similar ways, Tanrıkulu said: “They have not been heard from. It is said that despite evidence gathered by relatives of kidnapped and disappeared people, security footage and witnesses, no investigations have been launched. The security forces are reluctant to launch an investigation.”

Underlining that all of the kidnapped people were targeted by an investigation into the Gülen movement, accused by government of mounting a coup attempt last July, and suspended from their jobs by government decree, the CHP deputy said, “According to security footage and witness testimony, in all the kidnapping cases black Volkswagen Transporter vans were used, and all seven were followed by people whose faces can be identified in security footage.”

The European Union said in June it was closely following developments in Turkey including the abductions of people from the Gülen movement, reminding Ankara of its responsibility to investigate these reported cases.

“The EU is closely following developments in Turkey on a daily basis. As for the reported cases of abductions, the EU has on many occasions stressed that any alleged wrongdoing or crime should be subject to due process and that the right of every individual to a fair trial needs to be respected,” said an EU spokesperson in response to a question about instances of abduction in Turkey.

Prominent scholar Tariq Ramadan, grandson of the founder of the Muslim Brotherhood, has criticized the Turkish prime minister for seeking more power and urged him to rethink staying in power for a longer time. Ramadan said, Prime Minister Recep Tayyip Erdoğan once told former Egyptian President Hosni Mubarak — that one day he will have to know how to leave — is true for him as well. “[Erdoğan] also needs to get this right.”