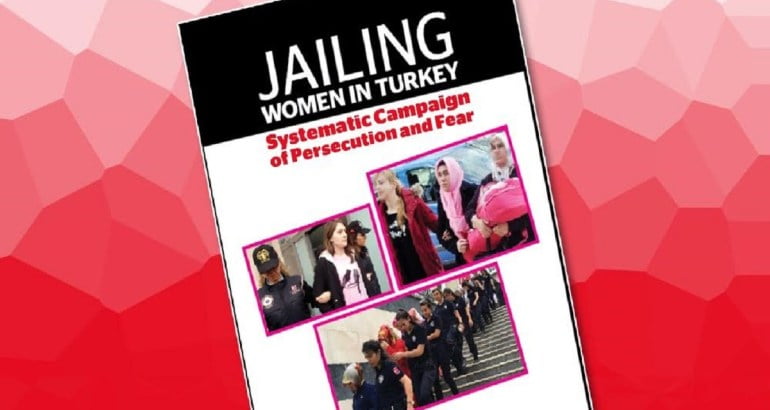 Thousands of women, many with small children to take care of, were jailed in Turkey in an unprecedented crackdown and subjected to torture and ill-treatment in detention centers and prisons as part of the government’s systematic campaign of intimidation and persecution of critics and opponents, a new report titled “Jailing Women In Turkey: Systematic Campaign of Persecution and Fear” released by Stockholm Center for Freedom (SCF) has revealed.

The motivation behind Turkey’s deliberate policy of imprisoning women who, in some cases, have just delivered babies or are pregnant, appears to be creating a chill factor in Turkish society and muzzle dissenting and critical voices.

In several cases SCF has identified, women were detained in a hospital immediately after the delivery of her baby before they had a chance to recover. Many women were jailed as she was visiting her imprisoned husband, leaving the children stranded in the ensuing chaos in the criminal justice system that was abused by the government to punish critics.

In one case, a woman lost her sanity under torture while in police detention, yet she was thrown back into prison, despite a diagnosis to that effect. Another woman was jailed, because her husband, a journalist, remained at large. In many cases, the government has jailed the wives of businessman who are seen as supporting the opposition to Turkey’s autocratic President Recep Tayyip Erdoğan in addition to seizing all their businesses and personal assets.

“This practice of deliberate targeting of women sends a warning message across the board that nobody would be safe from the wrath of President Erdoğan and his government,” Abdullah Bozkurt, the President of SCF, has said.

“This is clearly in breach of Turkish laws as well as rules and regulations that Turkey has committed itself to comply with as member of the various intergovernmental organizations,” he added.

The shameful practice of jailing of women from judges to journalists, from teachers to doctors in big numbers has added a new dimension to the massive government witch hunt that has been launched against critics, mainly targeting members of the civic group Gülen movement.

None of the women has any criminal record but now face criminal charges just because the government declared them to be terrorists and coup plotters overnight. They are not convicted yet, and in most cases, not even indicted, but were put in pre-trial detention as part of punishment.

In many cases SCF documented, the women’s physical and mental health deteriorated rapidly after they went through an abuse, isolation, poor diet and hygiene, lack of access to health care, and the psychic trauma of incarceration. The arbitrary detention of women in big numbers has taken a toll not only on jailed women but also on their children and family members.

The cases represented in this report is only a tip of the iceberg as many cases are not reported because of the fear of further persecution on the part of victims or their family members. Even the cases that were uncovered so far, some identified with full names and others only by initials to protect the identities, are enough to tell the horrifying picture in Turkey.

President Erdoğan who leads this witch-hunt campaign and his associates in the government must be held accountable for this appalling practice that result in devastating impact on the well-being of women and their children in Turkey.