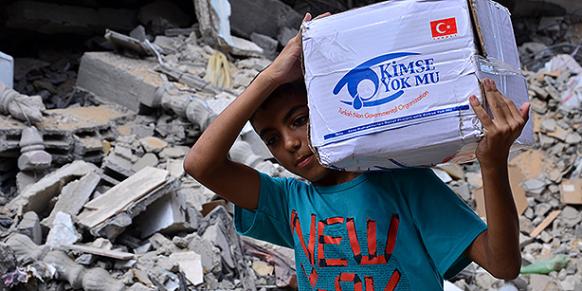 Kimse Yok Mu came to public attention in September of last year after its right to collect charitable donations was rescinded in a cabinet decision early in October of last year. (Photo: Cihan)

Kimse Yok Mu, which is affiliated with the Gülen movement, also known as the Hizmet movement, inspired by the teachings of Turkish Islamic scholar Fethullah Gülen, has become a target in a battle launched by the Justice and Development Party (AK Party) government against the movement. Several pro-government media outlets are carrying out a smear campaign, with publications accusing the charity of engaging in illegal fundraising activities despite a lack of evidence to that effect.

Kimse Yok Mu came to public attention in September of last year after its right to collect charitable donations was rescinded in a cabinet decision early in October of last year. However, the Council of State issued a stay of execution on the cabinet decision to rescind the charity’s right to collect charitable donations, saying the decision was against the law.

The 10th Chamber of the Council of State announced on Nov. 25, 2014 its decision regarding an appeal filed by the charity against the October 2014 cabinet decision that removed Kimse Yok Mu’s right to collect donations without obtaining permission from the relevant authorities. Noting that the cabinet argued that the charity was involved in irregularities in collecting donations in the justification for its decision, the court said it found no irregularity that would lead the charity to lose its qualifications as an organization that exhibits “accountability, transparency, institutionalization and reliability.”

“Once, a wolf drinking water from the river notices a lamb by the water and runs towards him. He is planning to eat up the lamb. But to block any likely help and to shift the blame onto the lamb by psychological pressure and thus eat it up comfortably, the wolf says, “Why did you […]