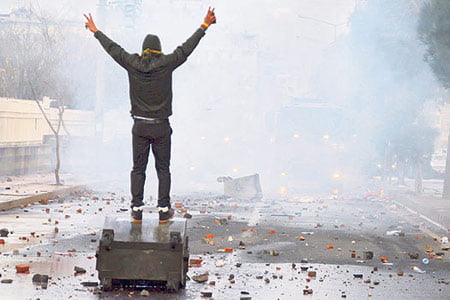 The latest moves taken by the AK Party against the Hizmet movement, which is inspired by Islamic scholar Fethullah Gülen and which has supported the party in its many democratic endeavors, seems to be part of its agreement with the PKK. Furthermore, recent discourses of the AK Party and the PKK have been very similar to each other.

A legislation to shut down prep schools, or dershanes, which are mostly owned by those sympathetic to the Hizmet movement, was recently passed in Parliament after the government drafted a bill. The bill was signed into law by President Abdullah Gül last week and came as a shock to many as it does not have any legal grounds to close education entities. According to legal experts, closing down dershanes by force violates the Constitution. However, the government claimed the regulation was aimed at reforming the country’s educational system.

According to the new law, dershanes will be converted into private schools. However, the government ignored the fact that only 5 percent of the 4,000 dershanes are eligible for conversion. In response to various criticisms regarding the legislation, government officials have said they would subsidize the tuitions of students who attend those private schools that were converted from dershanes. Another promise made by the AK Party is that the nearly 60,000 teachers who are currently working in such institutes and are concerned about being unemployed would be hired in public schools.

The law was announced on Nov. 14 by the Zaman daily with the headline “Massive blow to education” while it was still a draft bill. After it became law, its severity became more obvious. The law included an article leading to the removal of all the provincial directors of education, school principles and supervisors who have served in their positions for four years, as well as top educational officials.

In the final version of the law, the government broke its promise with regards to subsidizing students of private schools converted from dershanes. With regards to hiring dershane teachers, the law introduced the requirement of having six years’ teaching experience. Furthermore, those with six years’ experience in teaching will have to pass an interview, according to the law.

Speaking on the controversial law in February, Prime Minister Recep Tayyip Erdoğan said: “We intended to pass the regulation regarding dershanes before the local elections [on March 30] because the ‘parallel state’ had some plans and these plans had to be spoiled”. In another speech on March 1, Erdoğan stated all of the recently drafted laws were aimed at undermining the Hizmet movement.

Media reports recently said some business circles close to the government attempted to bankrupt Bank Asya, which is affiliated to the Hizmet movement, following the Dec. 17 corruption investigation. Another plan by the government was a smear campaign against Turkish charity Kimse Yok Mu, which is also run by people sympathetic to the movement. Pro-government dailies reported claims that Kimse Yok Mu had stopped delivering humanitarian aid to Somalia even though it kept receiving large donations from volunteers.

However, Kimse Yok Mu immediately denied the allegations, releasing a statement in which it listed its expenditure in Somalia and proving its ongoing involvement in Somalia via a live TV broadcast.

PKK uncomfortable with dershanes in East

The Taraf daily reported shortly before Dec. 17 that the National Security Council (MGK) had agreed in a 2004 document to draft legislations to suppress the Hizmet movement and other religious groups. According to the MGK decision listed in 15 articles, the homes and dorms provided to students by the Hizmet movement and businessmen financially supporting the movement would be closely monitored. These decisions led to the profiling of thousands of people by the government for being “members of the Hizmet movement.”

The dershanes in the South and Southeast of Turkey are considered crucial by many as they offer an opportunity for children of poverty-stricken families to enroll in a university by helping them increase their chances of success in schools as well as scoring well in central university exams. Representatives of civil rights organizations and leading figures based in the region state that students attending public schools would probably lag behind in university entrance exams as public schools in the East are much less qualified then those in the West.

The terrorist PKK has all along been uncomfortable with the existence of dershanes in eastern provinces because Kurdish children in dershanes are discouraged from joining the PKK as militants. PKK supporters have so far repeatedly attacked dershanes in the provinces of Şırnak, Mardin, Hakkari and Diyarbakır with Molotov cocktails. Some dershanes have even been attacked by militants using shotguns.