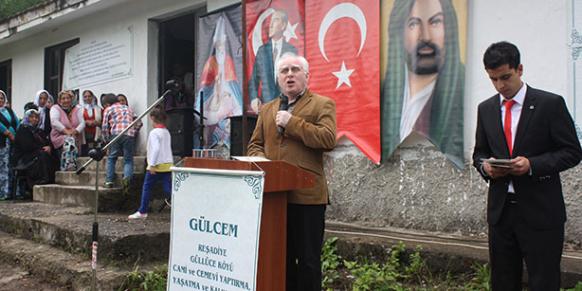 A mosque and a cemevi — an Alevi house of worship — will be built in the same complex in the Reşadiye district in the northern province of Tokat as a bridge-building initiative between the town’s Sunni and Alevi communities.

“The project that we have laid the foundation for will strengthen bonds between our people and highlight our differences as our source of richness. We are attaching great importance to this project in order to understand each other. Our religion and [holy] book is the same. We have a lot of common ground. For this reason, it’s very important to be located in the same complex. This project has special meaning. I hope similar projects will be realized in many other places,” said Muharrem Bektaş, the chairman of the association that launched the project, during the groundbreaking ceremony for mosque-cemevi cultural center.

The joint mosque-cemevi project was initiated by the Association to Construct and Maintain the Mosque and Cemevi of Güllüce, an Alevi village in Reşadiye.

When completed, the mosque and cemevi will share the same three-story building. The complex is scheduled to be completed in a year.

Reşadiye Mayor Cemil Kılıç and Tokat’s deputy mufti, Kenan Habiboğlu, attended the groundbreaking ceremony along with the residents of Güllüce village. During the ceremony, verses from the Quran were read while an Alevi prayer, Gülbank-ı Muhammedi, was also recited.

CEM Foundation Chairman İzzettin Doğan welcomed Gülen’s suggestion and took on the project, the first stage of which was financed by Sunni and Alevi businessmen.

Though it aims to strengthen bonds between the Alevi and Sunni communities, the joint mosque-cemevi project in Ankara has drawn diverse reactions from the Alevi community.

Alevi associations including the CEM Foundation, the Anatolian Alevi-Bektaşi Federation and the Association of Confrontation with the Past welcomed the project and stated that it would help alleviate tensions between Alevis and Sunnis and contribute to the culture of coexistence in Turkey. However, Alevi associations such as the Alevi Bektaşi Federation, the Pir Sultan Abdal Culture Associations and the European Confederation of Alevi Associations criticized the joint mosque-cemevi project, claiming it aimed to water down Alevism within “moderate political Islam.”

They also claim Alevi and Sunni communities do not have any serious problems with each other, adding that Alevis were demanding rights from the state, not from Sunnis.

In the aftermath of the Gezi Park protests last summer, demonstrations were staged against the project in Ankara’s Alevi neighborhood of Tuzluçayır, where the joint mosque-cemevi is being built.

The project in Ankara is scheduled to be completed this year.