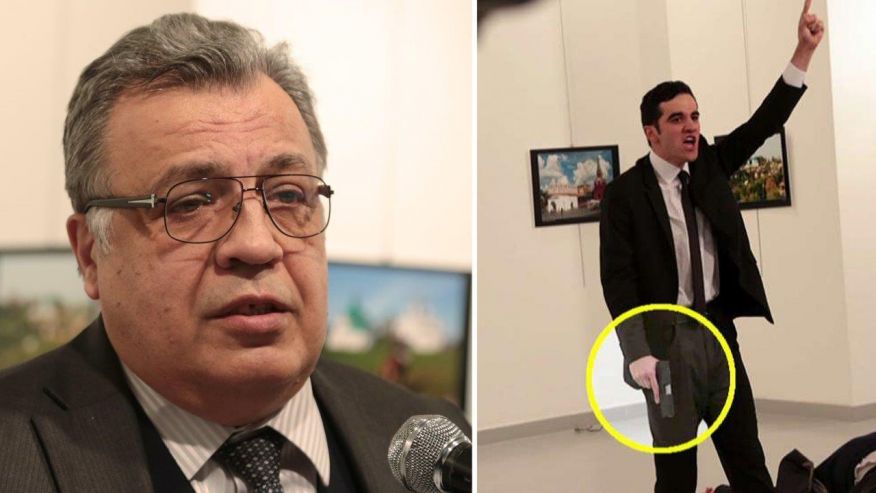 Turkey has emerged as a new citadel of the lethal global jihadism today. An Ankara-based Turkish journalist, Burak Bekdil wrote an article explaining how Turkey is becoming the victim of its own enthusiasm for Jihadism. Buttressing his point, he quotes the media bureau chief of Hizb ut-Tahrir Turkey, Mahmut Kar, as saying: “We are shouting out that we will re-establish the caliphate, here, right next to the parliament.”

On 5 June, 2015, homegrown jihadists in Turkey detonated bombs, killing four people and injuring over 100 at a pro-Kurdish political rally.

On 20 July, 2015, IS terrorists attacked the pro-Kurdish peace activists in a small town on Turkey’s Syrian border, killing 33 people and injuring over 100.

These were some of the most tragic incidents of jihadist terror in Turkey. But in all these cases, Turkish regime has shifted the blame from the jihadist outfits to ‘other terror groups’. Now, it has done the same in the latest terror incident of the Russian Ambassador’s assassination in Ankara.

While the Turkish officials have declined to state the actual aim of the Ankara killer Altıntaş, his ulterior jihadist motive went beyond saying as he loudly chanted “Allahu akbar” claiming to avenge attacks on Aleppo. In a mixture of Arabic and Turkish, he shouted: “God is great! We have made an oath to Muhammad to die in martyrdom … a revenge for Syria and Aleppo! Don’t forget Aleppo! Don’t forget Syria!”

Meanwhile, the global network of the violent jihadsim, IS has claimed the Ankara assassination without confirming if Altıntaş was an agent of theirs. Whether the Ankara killer was a self-motivated homegrown jihadist or member of a bona fide terrorist organization, his culpability was unquestionably of the jihadist nature. That he killed the Ambassador by pointing index finger into the air and signifying the Islamist cliché clearly shows he was an IS sympathiser. This has become a common sign of the IS jihadists in the final minutes before they turn into the self-styled martyrs (shaheed).

Despite this clear indication, Turkish officials continue to live in denial. They overlook the fact that IS sympathizers have deeply penetrated the country and now exist even in the Turkish police operating as the part of IS global jihadist network. But the blame of every jihadist attack in the country is cunningly shifted to an easygoing scapegoat branded as “Feto” (Fethullah Terrorist Organisation). A former ally of Erdogan, Fethullah Gulen is a moderate Islamic scholar living in exile in the US. Since the time Gulen showed an ideological confrontation with Erdogan’s policies of political Islamism, he has been booked as an ‘anti-Islamic terrorist’. Therefore, Erdogan accused him of plotting the botched Turkish coup without producing considerable evidence. Virtually, Erdogan sees a Gulenist hand behind every terror attack in today’s Turkey. While Turkey is scrawling with the jihadist terror, Erdogan entirely blames it on a liberal Muslim thinker and, thus, the jihadist outfits successfully operating in the country are rescued.

In the wake of the Russian ambassador’s assassination in Ankara, Turkey’s foreign minister told Secretary of State John Kerry in a phone call that the Turkish government believed “the Ankara police officer who assassinated Andrey Karlov on Monday was a Gülenist”. This phone call was reported by The Daily Sabah, a Turkish news outlet closely associated with Erdogan’s regime. Besides the Turkish authorities, several Turkish media outlets operating under Erdogan’s control have spread the same news that ‘Ankara killer was a Gulenist’.

Given the current curtailment of press freedom in Turkey, it is no wonder if the Turkish media outlets are flogging this fiction. But it is very distressing to note that this is also flogged in the Indian Muslim media with a similar tone and tenor. Urdu media, in particular, has twisted the facts and on-goings in Turkey. This leads the Indian subcontinent’s Muslims to think of Erdogan as an ‘Islamic democrat’ ruler fighting Fethullah Gulen, who is a ‘deviant Muslim cleric’ and an ‘agent of anti-Islamic forces’.

In fact, all rationalist and modernist Muslim thinkers opposing the politicization of Islam are stereotyped in the similar ways, not only in the Islamist societies but even in democratic countries like India. Several editorials in the leading Urdu newspapers in India shape an opinion antithetical to the moderate thoughts of Gulen in an attempt to endorse and justify the political Islamist policies of Erdogan. On 23 December, Ahmadullah Siddiqui, senior sub-editor in Inquilab, a popular Urdu daily in India, wrote in his article entitled “Tyyep Erdogan, Gulen Movement and Turkey’s state of affairs”:

“Fethullah Gulen’s opinion on ‘Political Islam’ is totally identical to the thoughts of the European and American Islamophobes. Their view, in a nutshell, is that those dreaming an Islamic democracy in the Middle East are ‘extremists’ and that they should not be allowed to come to power. For they look up to the supreme power, the Almighty Allah, as their source of guidance, rather than a worldly super power. Unfortunately, Gulen who is considered an Islamic scholar is allied with all other forces which are trying to expel the Islamic Democrat, Tyyep Erdogan”. (Daily Inquilab, Page 11, 23 December, 2016).

This narrative is grossly spreading in the Urdu media without any substantial evidence. So far, neither the Turkish media nor the regime came up with any substantial evidence to prove that Ankara assassin was a Gulenist. They have publicized only a false report that Altintas, the Russian Ambassador’s assassin, shared an address in Ankara with a US-based Turkish journalist ‘accused’ as a Gulenist. But this is an untenable accusation against Fethullah Gulen, as the accused journalist has published documents candidly refuting the allegation that he shared an address with the gunman.

More to the point, Gulen has lambasted the Ankara assassination in the harshest terms much in the same way as he strongly denounced the failed Turkey coup. Condemning this incident as “unjustifiable act of terror”, Gulen stated: “I am shocked and deeply saddened to learn of the tragic assassination of Russia’s Ambassador to Turkey, Andrey Karlov, who was speaking at an art gallery in Ankara”…. “No terrorist act can be justified, regardless of its perpetrators and their stated purposes. It is the expectation of the Turkish people and the world that the government investigate the circumstances of this incident, identify those who aided the perpetrator and take the necessary precautions so that such an attack cannot be staged in the future”, he said in a recently released video.

The Gulenist network, popularly known as Hizmet (service), is a civil society movement inspired by Gulen’s modernist and progressive Islamic theories with a decades-long record in peace activism, education and interfaith dialogue in Turkey and around the world. But, ironically, Erdogan finds it more expedient to blame Hizmet, rather than Daesh (IS), for the jihadist atrocities being consistently perpetrated in Turkey today. Thus, the Turkish Islamist president has got a scapegoat following all terror incidents of jihadist nature or other internal crisis engulfing the country.

Clearly, Erdogan’s lame accusation against the Gulanists in the Ankara assassination shows that Turkey is turning a blind eye to the IS threat looming large in the country. Ankara is only interested in running down the Gulenists instead of the jihadist networks operating on the Turkish soil, actively and freely indulged in wanton killings. It certainly does not augur well for the terror-ridden country.

The author is a scholar of comparative religion, classical Arabic and Islamic sciences, cultural analyst and researcher in media and communication Studies. Views are personal. He tweets at @GRDehlvi.

Who is behind the assassination of Russian ambassador in Turkey? Who was Mevlut Mert Altintas?