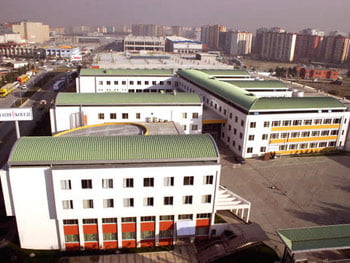 One of the Branches of Fatih Schools in Istanbul

Smiling 11-year olds Serra and Liyna, fellow pupils at the 5,000-pound-a-year Fatih College primary school in Istanbul, chime in similarly confident English that their favourite subject is science and they want to be doctors.

(Reuters) – Nine-year-old Burak says his favourite subject is maths, he loves studying and writing in English, and when he grows up he wants to be a policeman.

Smiling 11-year olds Serra and Liyna, fellow pupils at the 5,000-pound-a-year Fatih College primary school in Istanbul, chime in similarly confident English that their favourite subject is science and they want to be doctors.

This is the 640-pupil school run by followers of Fethullah Gulen — a Turkish Muslim preacher who advocates a moderate Islam rooted in modern life, and whose teachings have inspired millions of Turks to forge a powerful socio-religious community active in publishing, charity and above all education.

But if the Gulen movement is seen by outsiders as a moderating force in an increasingly fundamentalist Muslim world, it rings alarm bells for some Turks because it encapsulates the tensions between secular state and religious power.

Gulen, 67, has a reputation abroad as a Muslim who preaches tolerance and engagement with other faiths. But many in Turkey’s secularist establishment say he has a political agenda and wants to create a religious state and a cadre of people to run it, a charge his followers vigorously deny.

Attitudes to the Gulen movement in Turkey are deeply entrenched and reflect a wider struggle for the country’s identity and power base.

The movement has built up a network of some 800 schools around the world, teaching a full curriculum focusing on science and technology, and encouraging pupils to aim high.

In Turkey it follows the national curriculum and teaches only comparative religion according to strict outlines set by the state. However, most teachers adhere to Gulen’s views.

“Some parents send their children here because they are religious. Others know the schools are very successful and want their children to go to university, while other parents are scared that if their children go to a government school they will start smoking and drinking,” said Ahmet Yalcin, an English teacher at Fatih College’s high school.

“Teachers are religious people who don’t smoke or drink and act as an example to their students,” he added.

Gulen’s readiness to interact with other faiths took him to a meeting with Pope John Paul II in Rome in 1998 and he has also met Jewish and Orthodox leaders.

Though predominantly Muslim, Turkey was founded as a fiercely secular state in 1923 and a powerful elite of military, judicial and academic officials acts as custodians of this role.

Now a shift in society is bringing to the fore a rising class of religious professionals, from which Gulen gleans much of his support, to the alarm of the old guard such as the army.

This shift helped sweep the Islamist-rooted AK Party to power in 2002.

Gulen has even been charged, then later acquitted, with plotting to destroy the secular state and establish Islamic law. He left for the United States shortly before the case began.

His supporters estimate there are 5 million Gulen sympathizers among Turkey’s population of 70.5 million and people on all sides recognize the movement has grown in influence in a country where the military were long dominant.

“Fethullah Gulen is the first person in the history of Turkish Islamic thought who realized that the world is changing,” said Kerim Balci, a columnist for Today’s Zaman, a Turkish English-language newspaper close to the Gulen movement,

“He changed the conservative discourse of scholars, changed it radically … to look for the common ethical roots of all religions,” he said, adding Gulen has bought Islam to the global market, teaching his followers how to adapt to new realities, unlike more Middle-East rooted interpretations of the faith.

Gulen build up his reputation with intense sermons that often moved him to tears. From his base in Izmir, he toured Turkey stressing how to embrace scientific progress, shun radicalism and build bridges to the West and other faiths.

Since he moved to the United States in 1999 he has kept in contact with books, videos and an extensive website full of free texts and videos. He rarely speaks to the press.

His teachings are related to those of Said Nursi, a Turkish pro-western Muslim thinker who died in 1960.

The first Gulen school opened in 1982. As the number of his followers increased, so have the schools. There are now about 300 schools, night schools and a university in Turkey. Schools have also opened across Central Asia.

Cemal Usak, chairman of the Journalist and Writers Foundation, which has Gulen as its honorary leader, said surveys showed 83 percent of Turks were sympathetic to Gulen educational institutions, which adhere to strict government guidelines banning overt religious education.

At Fatih College — which is in Avcilar, a new middle-class suburb on Istanbul’s European shore — the portrait of Turkey’s founder Mustafa Kemal Ataturk hangs in every classroom. Gulen’s teachings do not feature on the programme, otherwise the school would be closed.

“Their focus is on uplifting secular and religious Turks alike through education,” said Timothy Winter, an expert in Islam at Cambridge University. “Ambitious upwardly mobile Turkish families are keen for their children to be involved with them.”

Columnist Balci said he owes much to the community and became interested at age 12.

“The movement took me out of the village, helped me to get educated … It made me into somebody I wouldn’t have dreamed of.”

Gulen wants to see a renaissance of the modern Muslim world with Turkey at the forefront, deriving from its historical position as head of the multi-ethnic Ottoman empire.

His supporters say he has no political ambitions and backs the division of state and religion — but his critics think otherwise.

“It is a political movement … and it has always been political. They think power is very important. They want to train an elitist class which will then turn Turkey into a centre of the religious world, Islamise the country,” said Hakan Yavuz, a professor of political science at the University of Utah.

“It is the most powerful movement right now in the country. They are powerful in the media, the education ministry and the police force… The point where they are today scares me. There is no other movement to balance them in society.”

People within the Gulen community dismiss such views as paranoid and alarmist, arguing they have no secret agenda.

“Our main problem is working with secular fundamentalists … They don’t know us and they don’t want to know us. They have great prejudice…They are suspicious of everything,” said Usak.