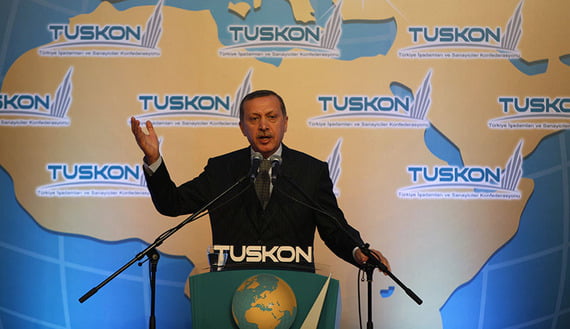 In the post-election climate, fears of the Gulen movement seem validated as we observe a gradual, yet drastic shift in the Turkish business alignment map. On April 23, the Capital Markets Board stopped Bank Asia from issuing sukuk (Islamic finance certificate bond) debt. Bloomberg reported on April 26, “The Turkish lender in partnership talks with Qatar Islamic Bank must ask the regulator for permission to issue further sukuk under a 1.25 billion lira ($587 million) debt program.” Asia Bank, the lender, is a member of TUSKON, the Confederation of Businessmen and Industrialists of Turkey, known for its close association with the Gulen movement.

This is a mind-boggling change given the fact that only in early 2013 Turkish Prime Minister Recep Tayyip Erdogan traveled with TUSKON’s chairman and other associates on his official international trips. In April 2012, Erdogan addressed TUSKON’s annual gathering with praises for the accomplishments of these businessmen.

The deteriorating relationship between the Gulen movement and the government has also affected the business world. Head of TUSKON was quoted as saying, “Invite politicians into the business world if they prefer making profits instead of serving the public,” as a response to Erdogan’s call to the Gulen movement to form a political party if they want to rule the country.

To understand how the Turkish business world’s alignment has shifted over time, let’s briefly explain the playing field. TUSIAD (Turkish Industry and Business Association) is the oldest and the most prestigious club. It has about 600 members representing the most prominent businesses in Turkey, which employ around 50% of the work force, excluding public and agriculture sectors.

In the 1980s, the Turkish economy’s liberalization helped small Anatolian businesses improve their standings. However, those businesses could not initially make it into TUSIAD. Commonly referred to as the “Anatolian Tigers,” these businesses then formed other associations representing their interests. The most well-known being MUSIAD (Association of Independent Industrialists and Businessmen). MUSIAD was established in Istanbul in 1990, and represents about 3,500 businesses. Although the letter M stands for mustakil, meaning independent, collegially it is referred to as “Muslim.” In the early 2000s, TUSKON and several other associations were formed.

TUSKON was particularly favored by the Justice and Development Party (AKP) government, as the party’s relations with the Gulen movement flourished. Intriguingly, TUSKON was seen as a pioneer of the “outgoing and engaging” approach, populated by businesses willing to take risks in highly uncertain markets, particularly those in Africa.

Recently, lines between these associations have become quite blurred as the Anatolian Tigers have made inroads to the prestigious TUSIAD and reached the association’s upper levels. This change has not only broken serious taboos in the Turkish economy but also realigned Turkish businesses. Memduh Boydak, CEO of the family company Boydak Group — which Turkish magazine Ekonomist ranked No. 1 among 500 Anatolian businesses — now has a seat in the TUSIAD leadership. Muharrem Yilmaz, TUSIAD’s current chairman, is also known as an Anatolian businessman.

The jury is out on whether these Anatolian-based companies represent “green or Islamic capital.” For decades, scholars have questioned whether these businesses are the Islamic Calvinists. So far, they have adapted to the global market conditions and capital accumulation process smoothly.

A sentiment of deprivation has been the most crucial bond of solidarity among these conservative businessmen. Yet, success has erased that sentiment for the second and third generation of the Anatolian Tigers. The battle between the AKP and the Gulen movement has revealed the tarnished solidarity beyond denial. So much so that in February, Erdogan was quoted as saying they will wipe TUSKON “off the market,” or any business that cooperates with the ‘parallel’ state forces. Gone are the days of government support and protection for TUSKON. Yesiloglu told Al-Monitor that MUSIAD and DEIK (Foreign Economic Relations Board) are expected to be the new government favorites to replace Gulen-related establishments. In the midst of the battle between the Gulen movement and the government, several nongovermental organizations and business establishments have been forced to choose a side. One of the alleged leaks has supported Gulen movement’s suspicions that AKP elites are pressuring the business community to take an open stand against the Gulen movement.

While many were questioning if these companies can survive without Erdogan, Mustafa Boydak, vice chairman of the Boydak Group’s Executive Board, spoke up against Erdogan, arguing, “Governments did not make us, we made them successful.” In the simplest terms, the relationship is complicated and interdependent. It is no longer the Anatolian capital against Istanbul businesses, but many businessmen now view the playing field as “MUSIAD versus TUSKON.” The fraction lines among the Anatolian Tigers have become too deep to ignore as the Gulen movement’s battle with the AKP intensifies.

What will happen now? Will the political and legal struggle between these forces also affect the Turkish economy on a large scale? Will the government further penalize businesses labeled as supportive of the Gulen movement? Gulen-associated businesses inside Turkey have already been “punished.” Several pundits have told Al-Monitor they do not expect TUSKON-related businesses, particularly Asia Bank, to survive another year. Erdogan has always been quite savvy to utilize money as a tool to “discipline dissent.” Given the fact that many Ankara bureaucrats now refer to Erdogan not as a “micro” but “nano” manager, we can see how effective money can be in his “management” plans.

Neslihan Tonbul, a senior credit marketing specialist and board member of Turcas Petrol AS, told Al-Monitor, “Elections are over, and the public has given Erdogan a seal of approval. Markets thrive upon stability and trust. We see signals that markets follow the lead of the election results. Banking and finance sectors are crucial. The first quarter of the year in Turkey was fine. Indeed, Turkey did better than several European countries.” Tonbul and several other members of the business community agree the AKP government is taking the necessary and proper economic steps. One commented, “Despite all the political brouhaha, it is business as usual.”

The pious Muslims of Anatolia are proving themselves as shrewd and savvy businessmen who can compete on a global scale. Just going over the hurdle of the stereotype of “backward Anatolia” was a significant accomplishment for these establishments. They are over this stigma but also realigned according to their allegiances. Now the real test for many Anatolian Tigers will be on two fronts: Can these pioneer businesses survive without direct AKP support, and how many can resist punishment or co-optation by the government?

Gülen expressed his grief over the deaths of dozens of security members during terrorist attacks in the country’s Southeast last week. He also expressed his disappointment over the Turkish military’s failure to end PKK terrorism over the past 30 years.