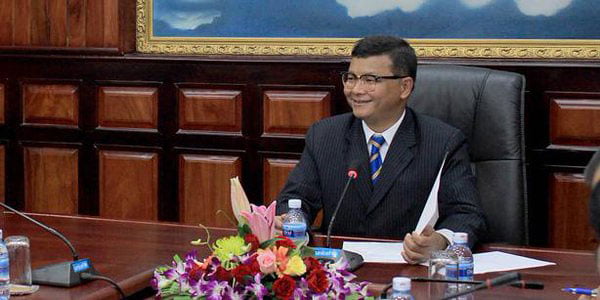 Turkish schools established by education volunteers from a faith-based movement inspired by the teachings of Turkish Islamic scholar Fethullah Gülen receive widespread praise due to the quality of the education they provide internationally.

Minister Naron expressed his thanks to executives of Zaman, a high school established by the volunteers of the faith-based Gülen movement that “contributes to the education of Cambodia” and wished the students continued success. Receiving information from Zaman High School Principal Gürkan Çil about other Turkish schools and project Olympiads, the minister added that he will write a report to Cambodian Prime Minister Hun Sen, asking him for a meeting with Çil.

Supported by the ASEAN+3 Center for the Gifted in Science (ACGS), the APT JSO is designed to develop the gifts and talents of individuals between 13 and 15 years of age in the field of science and technology and to nurture future scientists and engineers. A total of 81 students from 13 countries attended the Olympiad this year.

Zaman High School students in Cambodia also received two gold, four silver and three bronze medals for 10 projects they designed for an international high school competition on environmental issues called “The GENIUS Science Olympiad,” in which 1,176 projects were put forward by students from 69 countries. Since the first Genius Olympiad in 2011, students from the Zaman High School have won 24 medals in total: six gold, 10 silver and eight bronze.

Thai minister thanks Turkish schools for contributing to education

Visiting a college within the Marmara Education Institutions in Thailand, Thai Prime Ministry Undersecretary Panadda Diskul expressed his gratitude to the Turkish schools, saying they contribute a lot to Thailand’s education.

Ufuk Civelek and Ömer Faruk Karaçam, executive board chairman and general director of the Marmara Education Institutions, accompanied Diskul during his visit to Elmas College on Sunday.

Walking around the physics and chemistry laboratories of the college, Diskul examined experiments done by the students and asked questions about them. The minister received a painting with his name written in ebru (paper marbling) art as a present from Civelek.

Before leaving the school, Diskul talked to students’ parents waiting in the school yard and said: “I’m very impressed by my visit [to Elmas College]. I saw a great school with good teachers.”