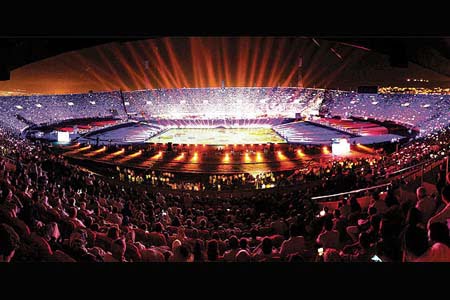 A total of 156 students from 25 countries took part in the stage performances. The event consisted of singing and poetry recitals by students,to a large audience in İzmir. (Photo: Cihan)

Students coming to Turkey from all around the globe for the 11th International Turkish Olympiad — a festival that celebrates the Turkish language and which this year has brought together 2,000 students from 140 countries — fascinated thousands of locals in İzmir with their stage performances on Sunday night.

A very large stage show was given by the Turkish Olympiad students in the western city of İzmir on Sunday night with nearly 100,000 locals attending. A total of 156 students from 25 countries took part in the stage performances, offering the spectators plenty to see. The event started with an opening speech by Işılay Saygın, a member of the International Turkish Olympiads organizing committee and former state minister. She stated during her address that the Turkish Olympiads started with just the participation of 62 students from 17 countries in 2003, but now has become a leading organization with the participation of 2,000 students from 140 countries under the theme of “Towards Universal Peace,” this year. Stating that the Turkish Olympiads is a product of a voluntary movement (referring to the Hizmet Movement, which is inspired by well-respected Turkish Islamic scholar Fethullah Gülen), the foundation of which was laid in İzmir years ago, Saygın stated the Turkish schools established around the world have played a major role in spreading the use of the Turkish language, which she defined as the language of love, peace and brotherhood, to the world. Saygın also added that the Turkish Olympiads is the first and only event being held in the world on behalf of the future of world peace.

The event continued with singing and poetry recitals by students from various countries, but the spectators showed the greatest interest in performance of a Tanzanian student who sang a song called “Tanzanya’nın bağları” (Tanzania’s vineyards). This song was a cover of a famous Turkish folk song, “Ankara’nın bağları” (Ankara’s vineyards). The performance was repeated upon the request of the audience.

The closing speech of the event was given by Transportation, Maritime Affairs and Communications Minister Binali Yıldırım. He stated that they as the government are proud of the point that the Hizmet movement, led by Fethullah Gülen, has reached at present, adding: “I am very happy to see the Hizmet movement, which was started on March 11, 1966 at the Kestane Pazarı Mosque in İzmir by the well-respected Hocaefendi [Gülen], now extends to almost all parts of the world today. If you as İzmir locals had not helped and opened your hearts to the Hocaefendi at that time, we would not be able to see such good scenes today in the Turkish Olympiads.”

Praising the hospitality that the İzmir locals have shown to the Turkish Olympiad students, Yıldırım stated that the students coming to Turkey from around the world are speaking the language of love, stating further: “This language [Turkish] is the language of [well-respected Turkish humanist] Yunus Emre, who said, ‘Come and let’s get acquainted.’ It is the language of Mevlana [famous Turkish poet and philosopher Mevlana Jalal ad-Din Muhammad Rumi], who said: ‘Come, come, whoever you are, wanderer, worshipper, lover of leaving. Ours is no caravan of despair. Come, even if you have broken your vow a thousand times. Come, yet again, come.’ And it is the language of Fethullah Gülen Hocaefendi, who said: ‘Open your bosom as wide as the ocean to allow in as many people as you can. Be proud of your faith, love people. There should be no downcast person to whom you did not pay attention or give a helping hand.’ We are saying today that we love people regardless of their religion, language and race. We consider the differences as a richness. We always love, respect and embrace every segment of society because we are in İzmir. İzmir is not the city of people who vandalize or devastate; it is the city of tolerance and love.” Expressing gratitude to the Turkish teachers working at schools in 140 countries around the globe for their great efforts, Minister Yıldırım also sent his greetings to Turkish Prime Minister Recep Tayyip Erdoğan for all the sincere efforts he has made and all the services he has performed for the country so far. The event ended with the choral performance of 156 students, who sang a Turkish song titled “Constructing a New World.”

The 11th Olympiad, which has brought together hundreds of foreign students from Turkish schools established throughout the world, is organized by the International Turkish Education Association (TÜRKÇEDER) and began on June 1 with a grand ceremony in Ankara. It will end on June 16 with a closing ceremony to be held at the Atatürk Olimpiyat Stadium in İstanbul. There have been also various stage shows performed by Turkish Olympiad students in 55 cities of Turkey during the event.