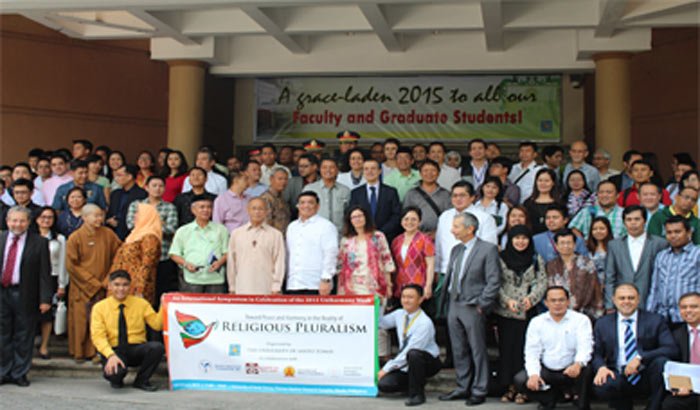 The introductory remarks of the conference, organized jointly by the Pacific Dialogue Foundation, the Journalists and Writers Foundation’s (GYV) Intercultural Dialogue Platform (KADİP), and the Asian Conference of Religions for Peace (ACRP), were made by Dr. Lilian Sison, who, touching on the dialogue activities spearheaded by various religious and civil society leaders, asserted that they act as pioneers of world peace. “Fethullah Gülen is one of the pioneers who take such steps,” she said.

Reminding that the United Nations General Assembly has declared the first week of February as the “World Interfaith Harmony Week,” Herminio V. Dagohoy, Rector Magnificus of the University of Santo Tomas, expressed his satisfaction for his university’s hosting the conference “Toward Peace and Harmony in the Reality of Religious Pluralism” to coincide with this meaningful week.

The speakers at the conference included Prof. Dr. Niyazi Öktem, a lecturer at Fatih University, and Rev. Dr. Turgay Üçal, the pastor of the Presbyterian Church in Moda, Istanbul, from Turkey, and Rabbi Reuven Firestone, the professor of Medieval Judaism and Islam, Dr. Sofia Pandya, a lecturer at California State University, Prof. Dr. Philip Clayton, a lecturer at the Claremont School of Theology, from the US, and Former Roman Catholic Church Philippines Archbishop Antonia Ledesma from the Philippines.

“Ignorance is the major obstacle to tolerance”

The first paper was presented by Professor Niyazi Öktem, who touched on concepts of tolerance, holy war (jihad) in Islam, and inter-religious dialogue. Noting that practitioners of diverse religions would come to realize a number of common points if they treat each other with tolerance, Professor Öktem indicated that ‘ignorance’ is the biggest obstacle to inter-religious rapprochement as people who are ignorant of the values of their own religions tend to nurture hostility against each other.

Öktem explained that holy war (jihad) is defined as a “self-defense” mechanism in the Holy Qur’an and true holy war is further depicted as the one against one carnal desires and uncontrolled ambitions.

He also relayed his observations about dialogue activities among diverse religious communities. Pointing out that the foundation of the Journalists and Writers Foundation (GYV) under the leadership of Fethullah Gülen, a well-respected Turkish-Islamic scholar, has helped to institutionalize individualized dialogue-centric activities, Öktem stated that the GYV has taken the dialogue activities to the international scene in the next stage.

Then, the floor went to Dr. Turgay Üçal, who remarked that they intermingle with hundreds of thousands of Muslim neighbors in Istanbul and they keep their church’s door open without any security concern.

Üçal drew attention to the fact that Anatolia has been home to diverse religions, nations and cultures for centuries and this has made people of Anatolia open and tolerant to diversities.

Reminding Great Sufi poet Yunus Emre’s advice, “Love creatures for the sake of their Creature” and the Torah’s and the Gospel’s commandment “Love your God from your heart and love your neighbor as you love yourself,” Üçal asserted that if this can be done, Prophet David’s good tidings in the Psalms that the wolf and the lamb will live together in peace will be fulfilled.

The next speaker was Dr. Sofia Pandya, who made a presentation about the Hizmet movement. After other speakers made their presentations, they answered the questions from the audience.

“You go if they cannot come”

Cihangir Arslan, the head of the Pacific Dialogue Foundation, delivered the concluding remarks, thanking the GYV, KADİP and other partners for their contributions.

Arslan also briefly introduced the Pacific Dialogue Foundation, established in Manila, the capital city of the Philippines, years ago to promote the ideal of peaceful coexistence. Referring to Rumi’s call, “Come whoever you are as this is no door of despair,” Arslan indicated that the Anatolia’s openness to dialogue and tolerance had been laid down years ago.

Arslan asserted that Gülen always holds Rumi in high esteem and he has taken Rumi’s call one step further. “Gülen advices us to go and help other people if they cannot come, and we act in accordance with his advice,” he said.