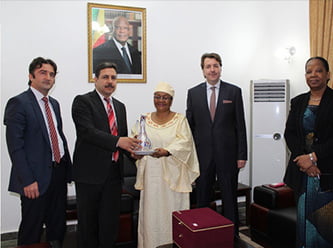 The first lady initially expressed her good wishes for the New Year and Mawlid al-Nabi to Malian and Turkish people alike. She further said, “I see the local Turkish school as the most instrumental factor bringing the two nations closer for the past 13 years now. These institutions are very well-received by our people and function as a role model to the Malian education system. You’ve been living side by side with the locals. So, I will say we are a family, if you will.” Mrs. Keita also noted the Turkish-Malian relations are growing every day.

The first lady further said she’s been closely monitoring the efforts by Horizon Turkish School, Mali Time to Help Foundation and Galaxy Dialogue and Cultural Center. “Our friendship has been growing every day especially because of the humanitarian and social aid efforts. Many thanks to whoever is involved.”

Mrs. Keita underscored the young generation’s need for vocational training and that problems will be overcome through solidarity.

Through the end of the visit, the first lady recalled the sekerpare, a traditional Turkish dessert, she received at last year’s visit and said she can’t forget its taste. The delegation presented a traditional Kutahya ceramic vase to Mrs. Keita, as a memento of the day.

Published [in Turkish] on Samanyolu Haber.

CUMALİ ÖNAL , CAİRO The Salahaldin International School (SIS) in Egypt, one of many schools sponsored by Turkish entrepreneurs throughout the world, has kicked off the new school year with 600 students, which is an astonishing success for the newly opened school. Speaking to Today’s Zaman, the director of SIS, Şevket Şimşek, underlined that the […]