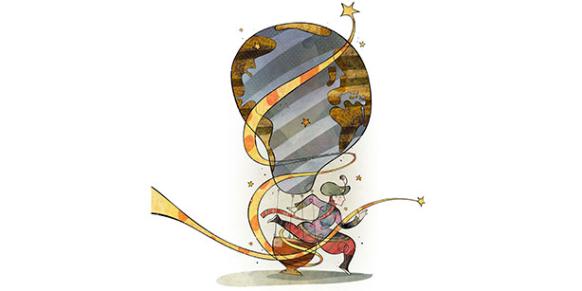 In our previous article, titled “How acts of ISIL, extremists have been securitizing ordinary Muslims,” we examined the impact of the emergence of the Islamic State in Iraq and the Levant (ISIL) on Muslim minorities in the West by analyzing some recent tragic events that occurred in Canada and the US.

We argued that ISIL (and extremist groups such as al-Qaeda and the Taliban) have harmed Muslims’ image around the globe more than any other group or ideology. We also argued that the dichotomic terms of “dar al-harb” and “dar al-sulh,” which were created by Muslim scholars in the medieval era, are not mentioned in the Quran and the Sunnah and they fail to respond to the complexity of international relations in today’s globalized world. Hence, it is clear that these terms have been created to serve geopolitical interests of the powerhouses and dynasties of those times in line with the political context of the time.

It appears that today, the radical interpretation of Islam and its adherents are applying these anachronistic concepts and using its terminology to justify or “theologically” ground their extremist actions, such as killing innocent people. It is for this very fact that there is an urgent need to clarify the roots of these terms and the context in which they were seen “acceptable” or “applicable.” As is discussed at the end of the previous article, we have been facing a “new” world and its new reality is not only financial but also cultural and ethnic globalization. This nature of globalization requires reinterpretation of existing “religious” concepts, which were created to serve geopolitical interests of power holders at the time and are now serving the interests of war lords.

Interests of Muslims in globalized world?

It is not an easy job to define the interests of a loosely connected group such as religious groups because of the diversity in understanding the principles and practice within the faith. However, in simple terms, what Muslims or members of other faiths need is a world in which they can practice their beliefs in peace; that said, the image painted of Muslims by the actions of radicals and the way some members of the media present these actions has led to the emergence of Islamophobia, and the construction and a perception of Muslims as a threat. Islam as an “ideology” and Muslims “as practitioners” have been perceived as “those who want to harm the very foundation/values of Western societies.” For instance, because of both the level of the tragedy and the manner of reporting by some irresponsible media outlets, the day after terrorist acts such as 9/11 and 7/7 people in Western cities began to suspect even their years-long Muslim friends and neighbors. As such, media representation of such events has been hugely studied in academia; however, the self-criticism of Muslims and Muslim scholars has not gone beyond condemnation of such actions.

Some more fundamental steps need to be taken urgently to challenge radicalism in the long run by challenging the utilization of concepts that have been used by extremists to justify their terrorist actions.

In the previous article we identified a number of concepts that have been used by extremists to ground and motivate radical actions. Two of these terms are “dar al-harb” and “jihad.” In this article we will touch upon the relevance of the term “dar al-hizmet” in our globalized world, and discuss the often misinterpreted concept of jihad.

“Dar al-hizmet” is a relatively new term used to describe a new Islamic worldview that does not divide the globe between Islamic and un-Islamic spheres but regards the whole world as the locus of serving humanity at large and through this service attaining the pleasure of God. Thus, “dar al-hizmet” as an Islamic term does not have its basis in geopolitical calculations and considerations (as was the case with the politically charged terms of “dar al-harb” and “dar al-sulh”) but in the social and spiritual concepts of ihsan, diğergamlık (altruism) and ultimately hizmet (service). Thus, “dar al-hizmet” has the potential to mobilize Muslims towards becoming more socially responsible in their communities and their host countries, regardless of the dominant faith or ideology, or the form of governance where they live.

It should also be stressed that the term “dar al-harb” has no place in the Quran and Sunnah, the two main sources of Islam. Therefore, Muslim scholars have been arguing for other terms such as “dar al-ahd” (abode of treaty), and “dar al-da’wah” (abode of invitation), which are less known and largely unknown in the West.

These terms, along with “dar al-hizmet,” may provide solutions to the problem of radicalizing groups that cite (and often misinterpret) certain fatwas that pertain to the medieval Muslim scholar Ibn Taymiyya. As pointed out in his book on Ibn Taymiyya’s position on struggling against tyrannical or oppressive rule, academic Yahya Michot argues that Taymiyya is often misinterpreted to incite violence towards non-Muslim rule, while what he suggests is patience and endurance, rather than fighting (“qital”).

Despite the fact that extremist groups have been basing their actions on some of his fatwas, these scholarly discussions that delve into the complexity of his religious arguments and place them in their historical, geopolitical and social contexts are noteworthy. These alternative arguments and alternative terms in place of “dar al-harb” need to be discussed by Muslim scholars as part of conferences and symposia and introduced to the wider public in order to prevent the radicalization of Muslim youth through extremist groups.

In addition, terms such as “musbet hareket,” propounded by Turkish Muslim scholar Fethullah Gülen, can also be instrumental in giving Muslim youth a constructive role in contributing to the wider society in their host countries. “Musbet hareket” (positive action) in this sense encourages being proactive in society with a positive outlook and being law-abiding citizens.

There is, on the other hand, a largely misinterpreted term, “jihad,” which is both twisted by the media and extremist groups to mean violence and aggression. Along with such terms as “dar al-harb,” the word “jihad” is used widely by the media to refer to “Islamic extremism.” On the other hand, extremist groups abuse the concept of “jihad” and utilize it to legitimize their acts of terrorism. While “jihad” does not in any way convey the meaning of “holy war” in Islam, it is often used interchangeably with this highly charged term. In reality, the term “holy war” does not pertain to Islamic terminology, with peace (“sulh”) considered an integral part of “jihad.” In this regard, the concept of “jihad” needs to be placed in context again by Muslims scholars and academics.

The correlation between the terms “ijtihad” and “jihad” should not be overlooked, given the fact that both stem from the same root. While “ijtihad” pertains to the domain of fiqh, that is, the effort towards the understanding and reasoning of the Quran and Sunnah, “jihad” has a more multifaceted meaning, from putting an “effort” in taming the carnal self in an effort towards representing the values and true character of one’s faith in everything each person does in his/her life. “Jihad,” in this context is a force for good and an effort towards constant improvement of one’s social conduct and good character in relation to one’s family, colleagues, community and the larger society.

However “jihad” is a word that is already securitized (constructed as an existential threat to some cherished values) and the meanings attributed to it are not peaceful. Thus, challenging the existing and deeply established negative meanings is perhaps only possible via empowering some alternative and newly emerging terminology such as “hizmet” (service). Promoting such notions to challenge concepts that are destructive within the present context of a globalized world is only possible through platforms that provide such interpretations, by showing the value of serving humanity and challenging constructed images.

*Mustafa Demir is a Ph.D. candidate in politics and international relations at the International Institute of Social Studies at Keele University, UK. Ömer Şener is a researcher and freelance writer who holds a Ph.D. in cultural studies and literary criticism at Queen Mary University of London.