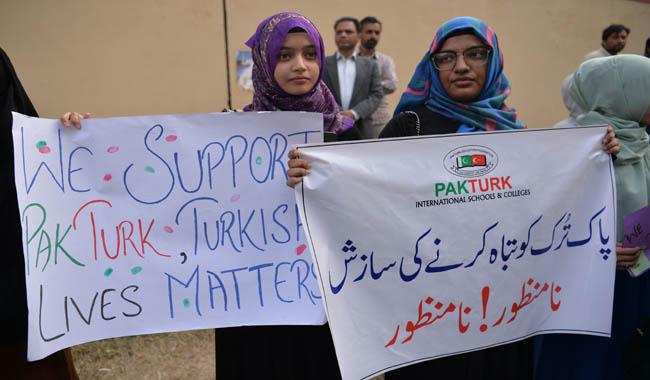 I’m a Mathematics teacher and decided to join other education volunteers who spread across the globe to share the message of peace and love.

In 2010,  I completed my university education, and thought time had come to join the journey of peace and safety. I was just 24. Though I had long time ahead, yet there was no reason to be late.

I came to know in my homeland that the volunteers for spreading education in Pakistan were required. I thought to make the most of this ample opportunity. It was indeed a great news! I convinced my parents so that I could join this sacred mission. May Lord be eternally pleased with my parents for they had permitted their beloved son.

The team under the name of PakTurk had arrived in Pakistan to extinguish the fire of illiteracy. For the same reason PakTurk provided scholarships to poor students.

We started to search the countries which do not require the visa for Turkish nationals. At least we needed to find a place from where we could get the passport for the unborn baby. I was also suffering from tragedy of being homeless like many other teachers around the world. We felt like a Bedouin in a desert who finds his way back to home.

It was my first experience in Islamabad when I witnessed people wearing traditional Shalwar-Qameez clothes and saw three-wheeled vehicles known as ‘Rikshaws’.

The orientation program was arranged by PakTurk where I came to know that  place of my appointment will be Khairpur in Sindh province.

The Khairpur campus was made functional in year 2002. The strength was 500. My Pakistani family described Khairpur to be a difficult place and thought I’d never adjust.

In order to sow the seeds of love through teaching mathematics, I arrived in Khaipur. It was an extraordinary experience.

Khairpur was a small city. The weather was hot coupled with electricity breakdowns . However, the dates growing in the region were delicious indeed! I tasted the raw-date, yellow in colour first time ever in my life here.

The native people were really warm, close and lively. My wife suffered many psychological problems and cried during her first days in Pakistan.

She couldn’t communicate with people around her as they were not able to speak  Urdu and English languages. The time of pregnancy in her second year was really hard! Due to the inavailability of proper health facilities, I sent her to Turkey.

I was blessed with a daughter, Zeynep. We came back to Pakistan, so that, the students should not suffer. My daughter was just forty days old when she suffered severe health issues.

Therefore, I sent my wife back to Turkey along with the baby for her treatment. The recovery of Zeynep Shevval had to take at least six months.

My wife was also a teacher so she left the baby to her grandmother and came back to Pakistan to continue her teaching.

In 2010,  I completed my university education, and thought time had come to join the journey of peace and safety. I was just 24. Though I had long time ahead, yet there was no reason to be late. In order to sow the seeds of love through teaching mathematics, I arrived in Khaipur. It was an extraordinary experience.

After the treatment, my daughter was brought by her grandmother. The little baby had forgotten her parents. Due to these reasons, she learnt to speak late.

The innocent child was oblivious of all the happenings. Keeping in view the historical fact ‘the people with big aims suffer a lot’, and ‘this time shall also pass’ we kept going.

Besides the mathematics-teaching, my only aim was to make my students good members of the society who could stay like a deep rooted tree without being withered.

We started sending hundreds of our students to represent Pakistan in different science olympiads on International level.

In the short span of 21 years, our students gifted the nation with more than 250 medals. This was a record performance ever in the history of Pakistan. I had to motivate my students for bringing more medals to Pakistan.

I had witnessed the destruction caused by the terrorism in Pakistan, many innocent children had been victim of terrorists attacks.

Khairpur was very dear to me and I couldn’t control my tears when I was leaving it in 2014. I was transferred to Karachi. While teaching the topic of division to my students here I kept emphasizing the importance of sharing.

The three years in Karachi kept me busy with lots of lectures each day. The winds in Turkey were getting momentum. The pressure and cruel practices towards the volunteers of this service started appearing in the media time to time.

On the other hand, like other volunteers, I also kept focusing on the students, motivating myself, and was planning for grabbing some more medals.

The people with ill intentions and aims of destruction had decided to play the story of ‘Ali Baba and the forty thieves’ in Turkey in the hot weather of July.

The scenario was planned and the roles were distributed, and some bloodiest scenes were added.They had to to convince the world that these volunteers were involved in heinous coup attempt.

It was early November 2016, when our Pakistani visa expired. Although we applied for the extension of visas three months earlier, there was no response from the authorities.

In the meantime, the arrival of the president of Turkey in Pakistan was announced when I was still teaching students to prepare them for mathematics Olympiad which was taking place in Thailand.

Later that month, our school received a letter about the cancellation of extension in visas along with an order of the deportation of Turkish families from Pakistan within three days.

Everyone was shocked as Turkey’s conditions were very uncertain. This was the first time in the history of Pakistan that the teachers imparting education to Pakistani children for 21 years, not involved in an kind of illegal activities, were about to be deported.

They had nowhere to go within three days. Some of them were tortured and jailed upon their return to Turkey. Help came from the United Nation (UN). Asylum seeker certificate was to be issued for the people who had no proper place to go.

The actual intention was to replace existing staff of the PakTurk schools and this secret was disclosed after  Marif Foundation teachers arrived From the Turkey.

From November 2016, the school administration couldn’t pay our salaries. We started facing lack of resources. Turkish teachers had sold most of their valuables and were living in miserable condition.

Devoted teachers whose profession was teaching were now acting as soldiers to save the schools without any complaints.

In the mean time we came to know that we were expecting a baby. My wife was pregnant and the days were full of miseries and sorrows.

These hard times and pregnancy multiplied the psychological traumas of my wife. My four years old daughter Zeynep Shevval was affected. The unsolved problems of unborn baby also became a part of life’s mathematics.

We had the asylum seeker’s certificate from United Nations (UN) but we were uncertain of the relief. The baby in the womb of mother was also affected. My wife and 1 started looking for the solutions in the long dark nights.

We started to search the countries which do not require the visa for Turkish nationals. At least we needed to find a place from where we could get the passport for the unborn baby.

I was also suffering from tragedy of being homeless like many other teachers around the world. When we came to know that some countries like Ukraine and Latin America issued the nationality to newly born children, we felt like a Bedouin in a desert who finds his way back to home.

On Tuesday evening of February all our world packed in three bags, believing in destiny, we left for the unending journey. For how many days and nights we will travel we didn’t know exactly. But I knew one thing for sure as we said goodbye to Pakistan and my dearest students that I was a teacher not a terrorist.